Walking and Listening to "Almost Super"

When you are born into a family of superheroes the fact that they are anything but ordinary is kept a secret from you until you are ten years old. When you turn ten, you hear about all the amazing things your family members can do and you begin to countdown until 4:23 pm on Leap Day, which is when you will be getting your very own power. Rafter and Benny Bailey are beside themselves waiting for their powers to emerge and when they do, they are beyond disappointed. Ever hear of a superhero who can turn his outie bellybutton to an innie or perhaps one that can light a match on polyester? Me neither, but those are what powers Benny and Rafter got. Talk about lame. Neither of the boys is comforted to hear that their cousins got equally useless powers.  Neither boy wants to go to school the next day for fear of facing Juanita Johnson, classmate and member of the super villain Johnson family (shake of fist), and whatever amazing power she got. Rafter and Benny soon learn that Juanita got an equally disappointing power and that she believes that her family are the superheroes and the Baileys are the villains. As confusing as this is to Rafter, he begins to sort through it and soon discovers that there is more to this than a simple misunderstanding. Someone has been pitting the two families against each other in hopes that their own villainy won't be discovered.   Rafter, Benny and Juanita are going to have to find a way to trust each other, work together and put an end to it.

Narrator Mike Chamberlin keeps a good pace throughout the story. While there is little variation between character voices, I was still able to tell which characters were talking. I also liked the occasional humorous tones in his voice.

Favorite Chapter Title: I'm Always Afraid of Getting Lava Down My Tights

Every now and then I switch up my walking route. This picture was taken while I was in the tree tunnel. 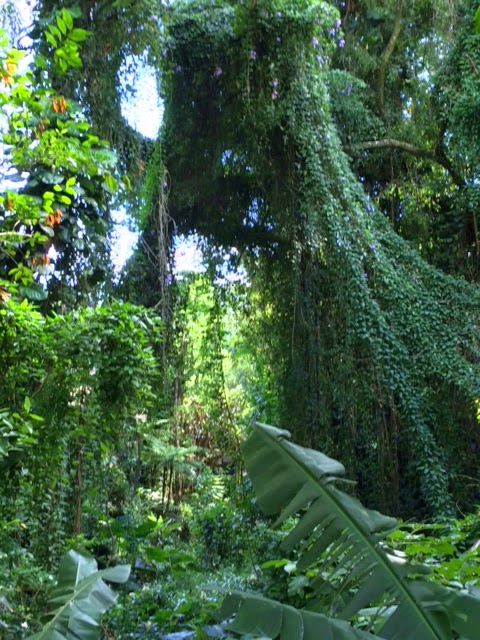 Posted by Marci Johnstone at 6:09 PM No comments:

Walking and Listening to "Loot"

Alfie had been a jewel thief all of March's life, imparting his tricks of the trade along the way. One evening however, Alfie's heist goes terribly wrong and March watches his father fall to his death. Alfie's dying words to March, "Find Jewels," don't make much sense and leave March even more confused and upset than he already is. Knowing he needs to make a run for it himself, March heads back to the apartment to grab his getaway pack and rummage through his fathers to see if there is any cash in there to help make escape a little easier. While March finds typical getaway pack supplies, toothbrush, fake passport, pre-paid cell phone, he also finds a book about moonstones, a deck of cards, a business card and an list that makes no sense at all. March decides these items must mean something and takes them with him. First stop: address on the business card. It is there that March meets his twin sister, Jules ("Find Jewels"). Unfortunately the family reunion is cut short when the March and Jules are taken into custody by Child Protective Services and sent back to the United States to live in a orphanage. On their way to the orphanage, March and Jules stop at the cemetery to bury their father. As they are leaving they meet Carlotta Grimstone who demands that the twins return the moonstones that their father had stolen from her. Having no idea what she was talking about, and with March not ready to admit he has a moonstone, they try to shake off her threats. Later one evening March and Jules are watching a crime show  featuring Carlotta Grimstone, the seven magical yet cursed moonstones that were stolen from her and the criminals behind it all, one of which was twin's father. Slowly piecing together that their father had fenced the moonstones and was in the process of stealing them back, the twins, along with their new friends Darius and Izzy, decide they are going to finish what their father started.  Before a plan can be properly hatched to retrieve the moonstones, Jules runs away leaving March feeling terribly betrayed. March, along with Darius and Izzy, decide to make a run for it themselves and get the moonstones back.

Michael Crouch does a great job voicing all of the characters, each one easily distinguishable. Some readers only focus on differentiating the voices of the main characters but Mr. Crouch makes sure all secondary characters are distinct and easily identifiable.

Side note: Loved the reference to Siouxsie and the Banshees and The Smiths.
Favorite Line: " Sometimes when you need inspiration you gotta reach for a cupcake."
Favorite Chapter Title: Peas and Thank You

Summer is still with us and the heat and humidity have been unbearable. So I have been trying to get out walking as early as possible and caught this sunrise one morning. 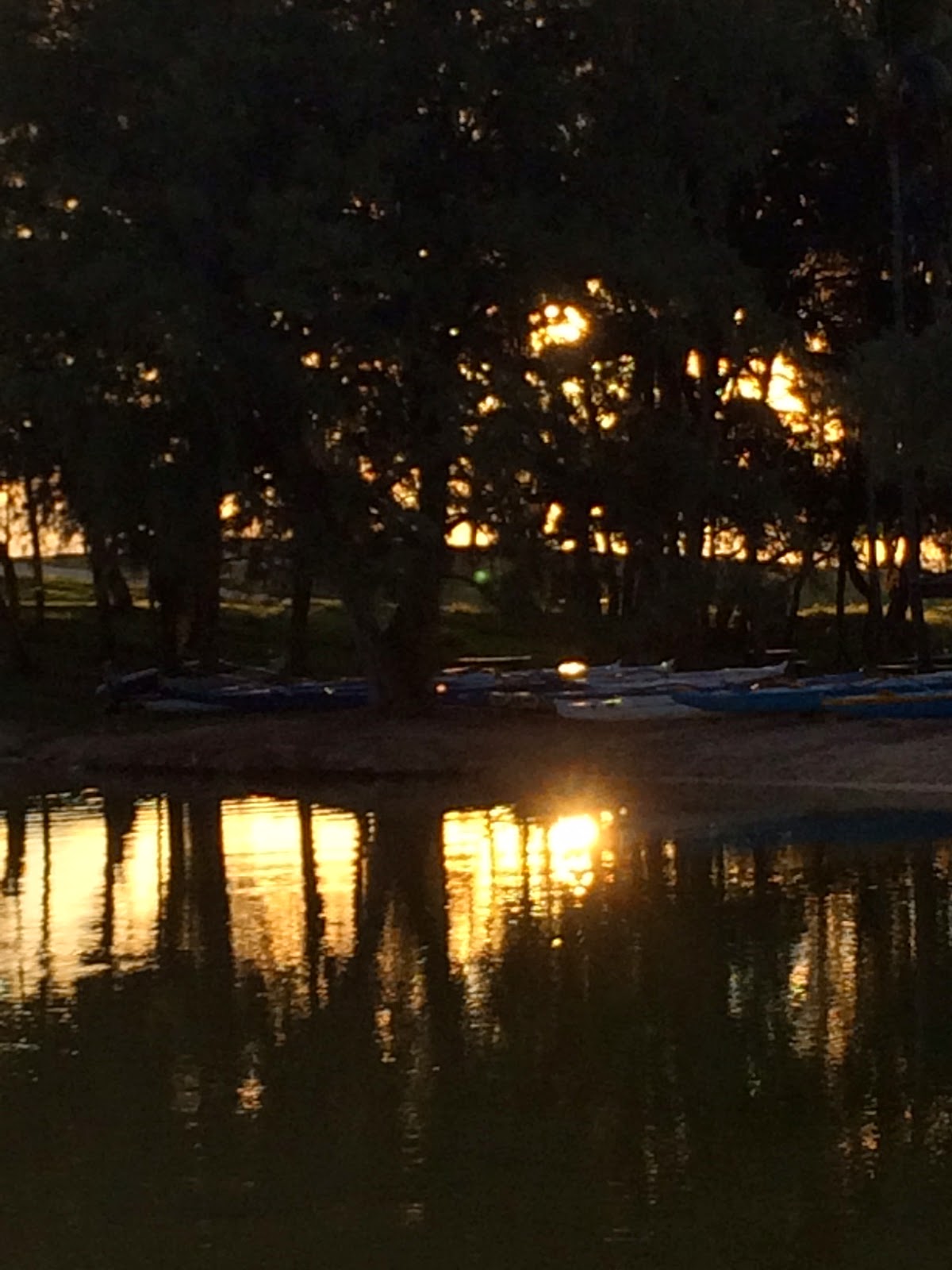 Posted by Marci Johnstone at 6:53 PM No comments:

Walking and Listening to Paperboy


Every now and then a book comes along that begs to be listened to. Something about having it read to you makes it even more powerful and touches you in a way that just reading on the words on the page possibly could. Paperboy is that book.

Little Man stutters, his stutter is bad. He has found ways to work around words he knows will trip him up, plans sentences in advance and feels comfortable speaking with only a handful of people. When his best friend Rat heads to his family farm for a month, Little Man takes over his paper route. Taking over the route is easy, it's the weekly collection that worries him, having to have a conversation with people he doesn't know and asking them for payment. However it is during these collections that he meets people that affect him in ways he couldn't have realized. Mr. Spiro makes the most powerful and positive impact on Little Man. From the moment they meet there is an instant bond between them and Little Man is drawn to his wisdom, the way in which he speaks and looks forward to their time together during the weekly collection. Mr. Spiro isn't the only powerful adult figure in Little Man's life. There is Mam, his caregiver with whom he can talk to about anything. Together the two of the experience several life changing moments and form an even deeper bond.

Lincoln Hoppe does a marvelous job as the character of Little Man. When he spoke you could feel the struggle of Little Man to get his words out and how painful speaking could be for him. His characterization of Mr. Spiro and Mam were also beautifully done. Having Vince Vawter read his Author's Note was a delightful treat. Hearing what his life has been like with a stutter made the story even more special.

Here is a picture I took one morning while I was out walking and listening. The summer sun and heat are still going strong. 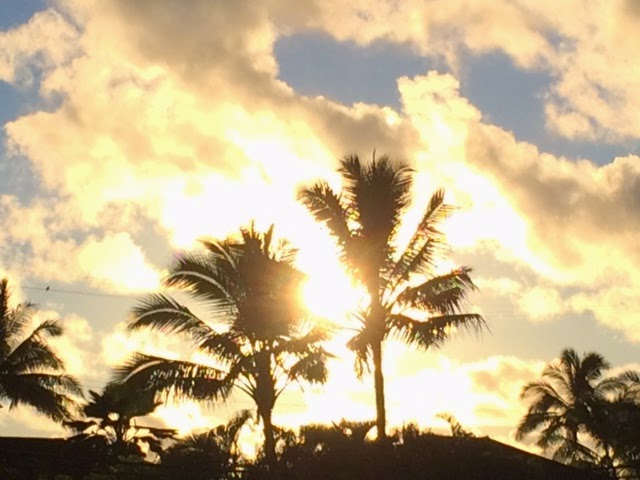 Posted by Marci Johnstone at 8:50 PM No comments:

"He's Taking Us On a Wild Goose Chase!" 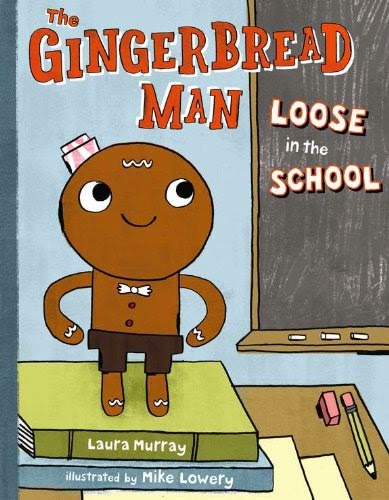 Several years ago I had read Shannon Miller's blogpost about a beginning of the year scavenger hunt she had done using the book Gingerbread Man Loose in the School by Laura Miller (http://goo.gl/YiUCnH). I loved the idea and thought it would be a great way for our second graders to learn about this new part of campus they were now a part of. I filed it away deciding to try it at the start of the next school year. Unfortunately, I forgot all about it until last year.
Last year I hid clues, like the one below, in various spots around campus. We had a blast racing around following the hints we were given, trying to figure out where we should go next. 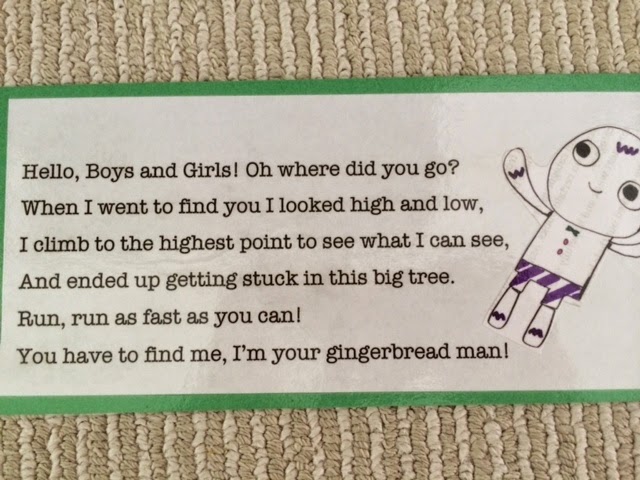 This year I decided to do something different. I decided to use QR codes as Shannon had suggested. I knew that the children had a great deal of experience with them the previous year on their iPads so I decided to give it a try. Having never created any myself before, I got some quick tips from our Technology Resource Teacher Liz. The best tip I got from Liz was to use Google Docs as a place to store the clues that the QR code would take them to. Once the QR codes were made, we were off! 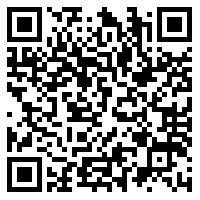 The Gingerbread Man first took us to the banyan tree. 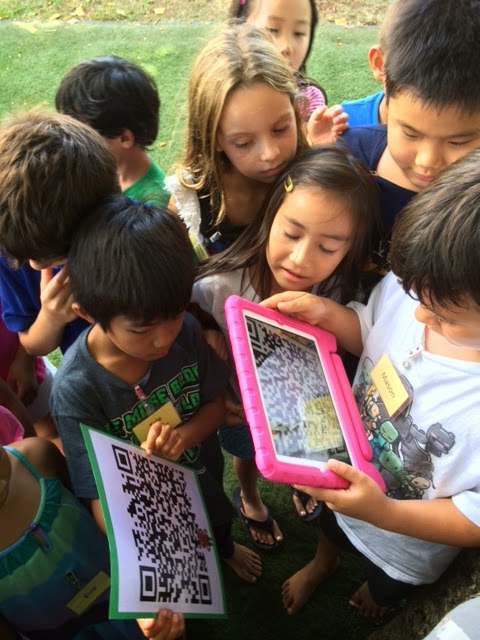 Then onto Mr. Lum's chicken's coop. Thankfully the Gingerbread Man got out of there before he was eaten! 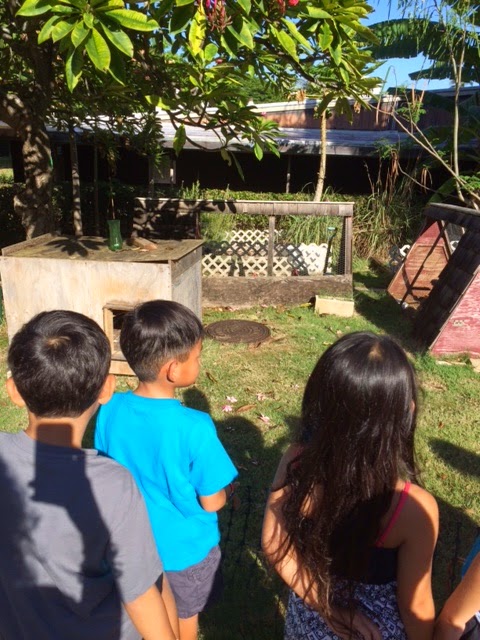 In his quick escape from the chickens he had stubbed his toe and needed to head to the office to get cleaned up. We made our way there hoping he was still there. 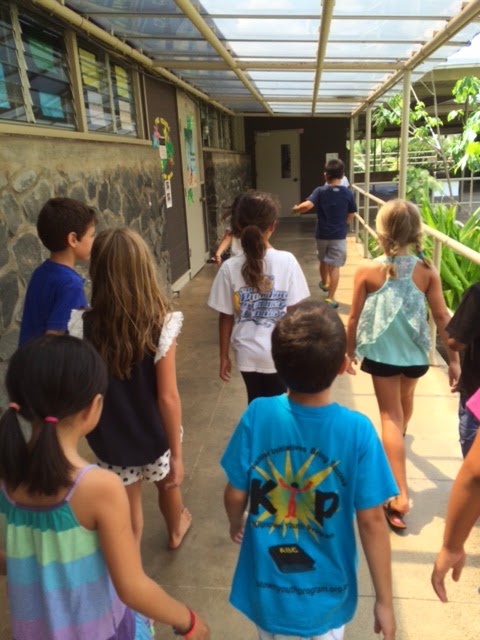 Unfortunately for us, he had already left and was told to go back to class, but he didn't listen. He went to the music room instead! 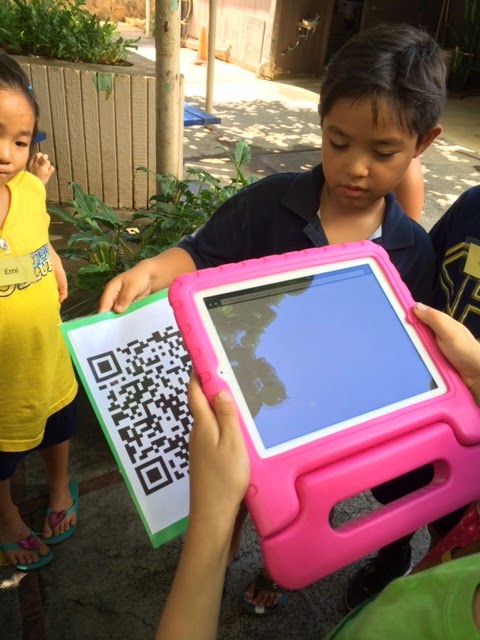 By the time we got to the music room he was long gone. Thankfully he left us another clue telling us to head back to the library. 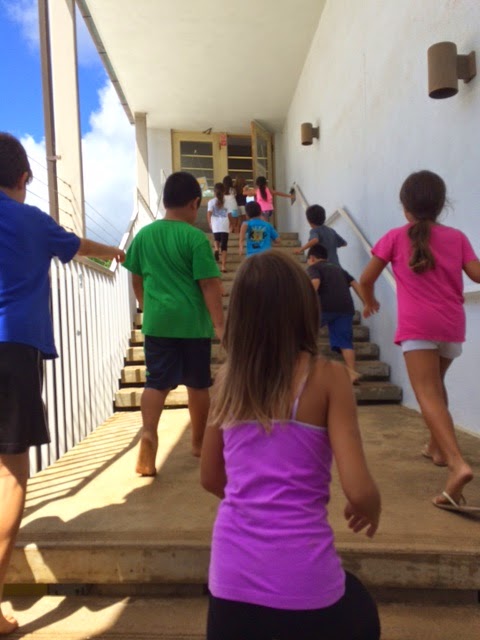 And there he was alright! Hiding on our giant Candy Land bulletin board with one last clue on his back. 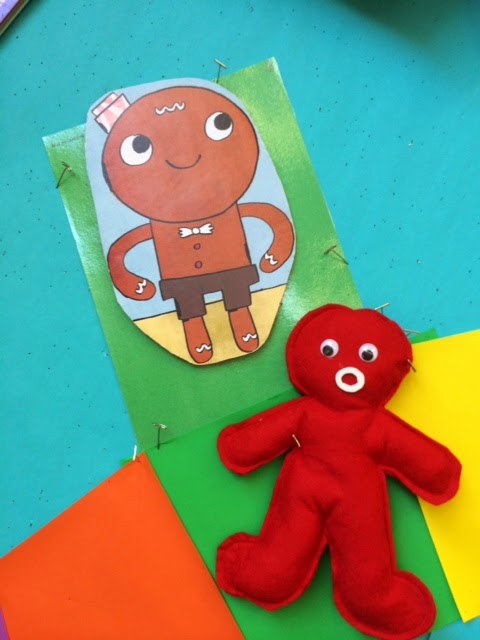 The kids had so much fun with this activity, speculating where he would go next, who set this all up and wondering if we would ever find him. I plan on doing this activity again next year and adding some additional places for the Gingerbread Man to visit.

Posted by Marci Johnstone at 3:11 PM No comments:

Our library is covered in bulletin boards and each month we switch them out to reflect the different holidays, themes, birthdays, each with it's own slogan.

Here are this months bulletin boards.

"This Year is Going to be Sweet"
How amazing is this giant Candy Land game board, complete with the little man game pieces and candy galore? I can not take any credit for it. It was made by my amazing co-worker Trudie. Our gingerbread man who has runout of his book (Gingerbread Man Loose in the School) loves to hide up there. 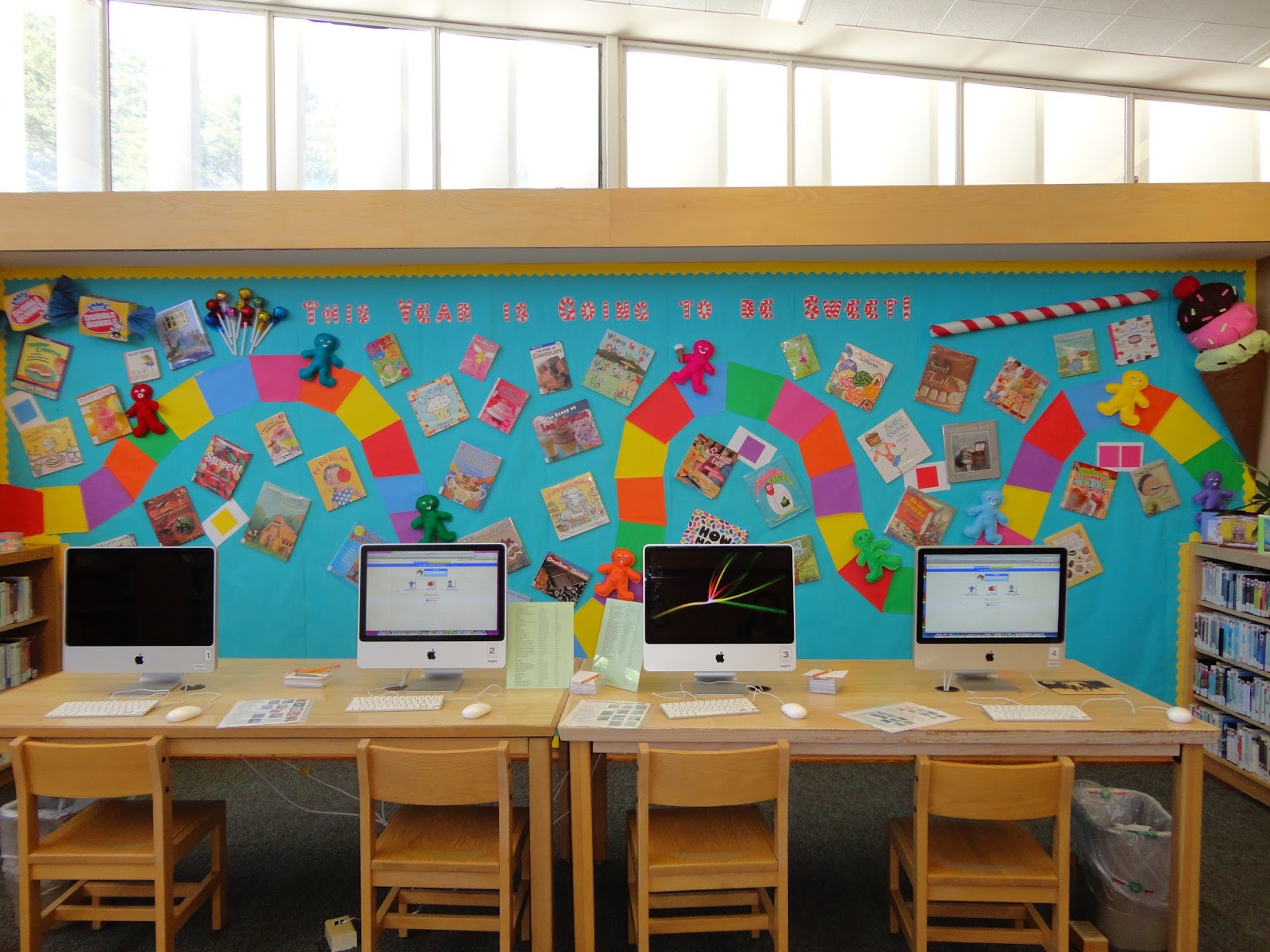 We also like to dress Greg up each month. This month he is all decked out in buff and blue, our school colors, to show his excitement for the upcoming school year and football season. 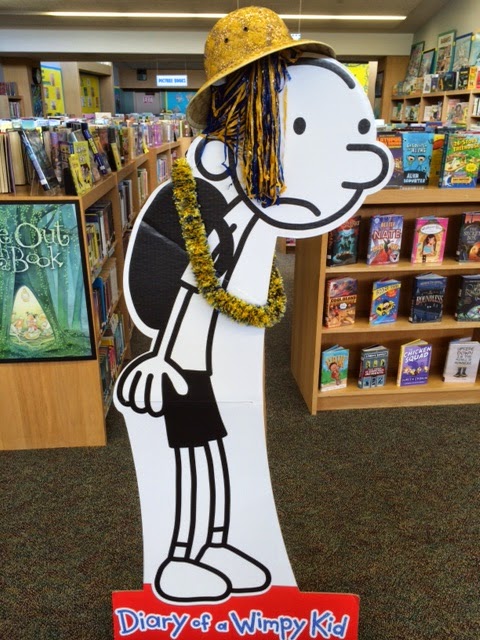 "Fly into a New Year": From this picture it's hard to tell how long and full this bulletin board is of picture books all about flying. 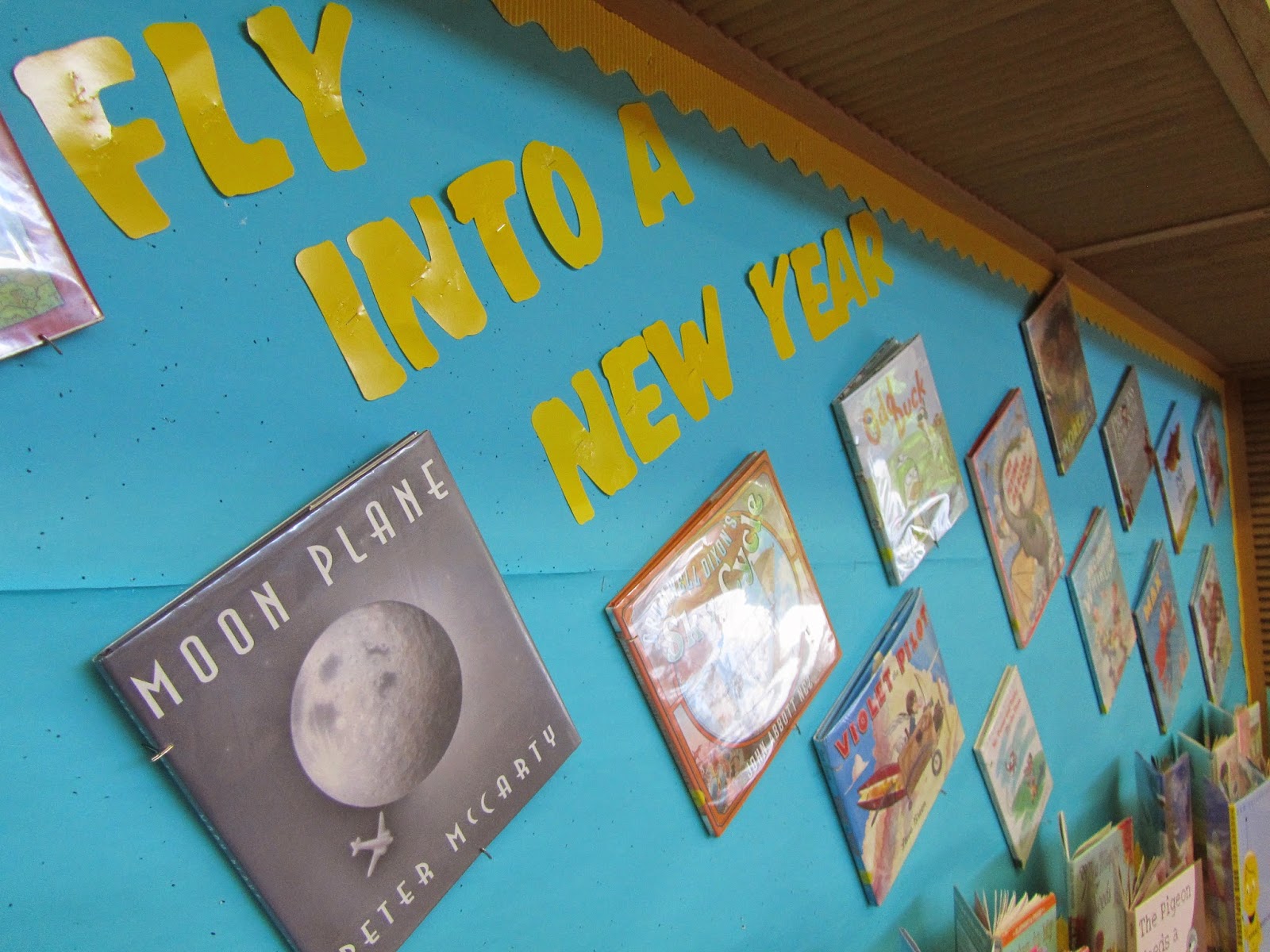 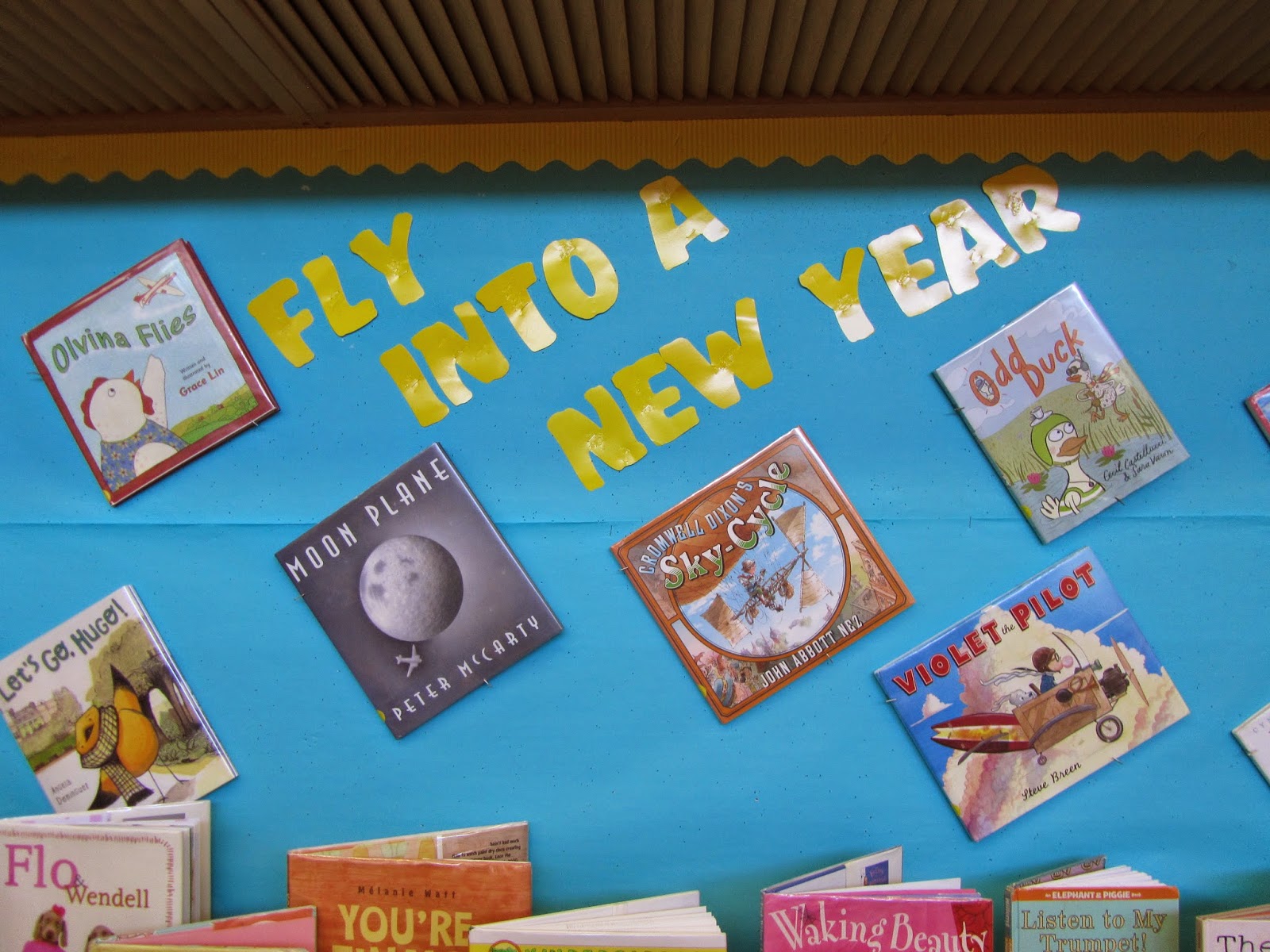 Every month we celebrate a different author or illustrator's birthday. This month we honor Rob Scotton. 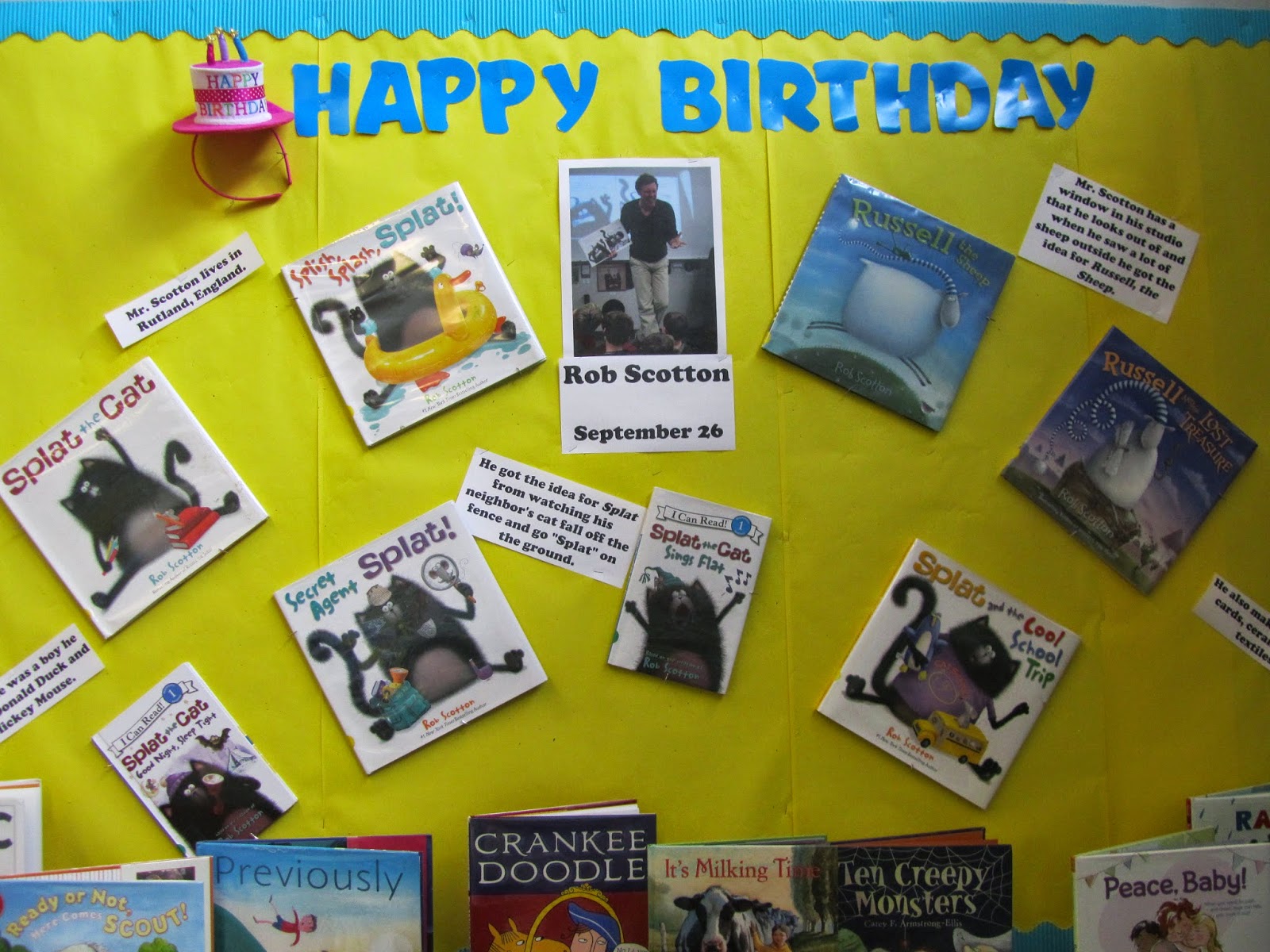 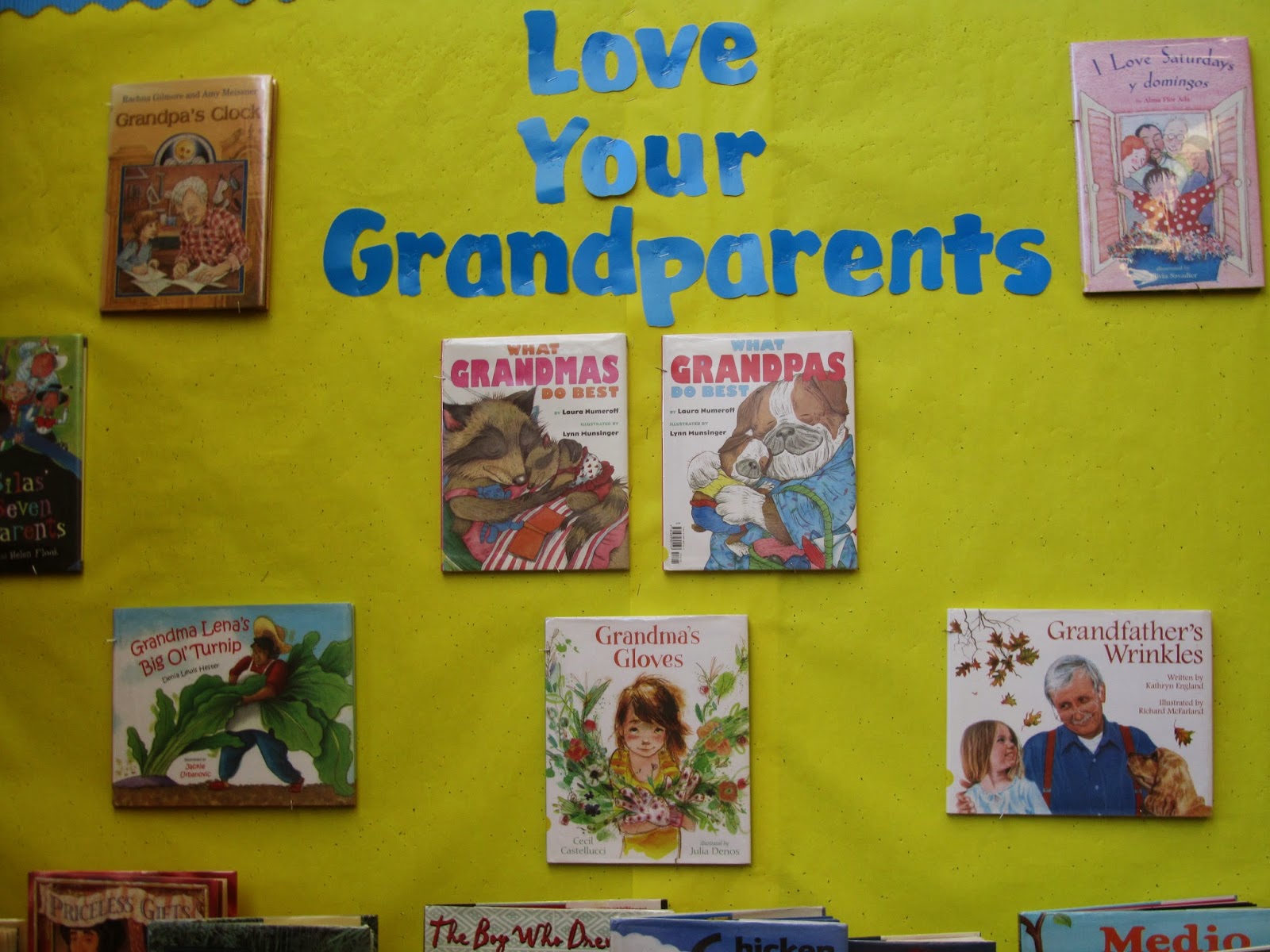 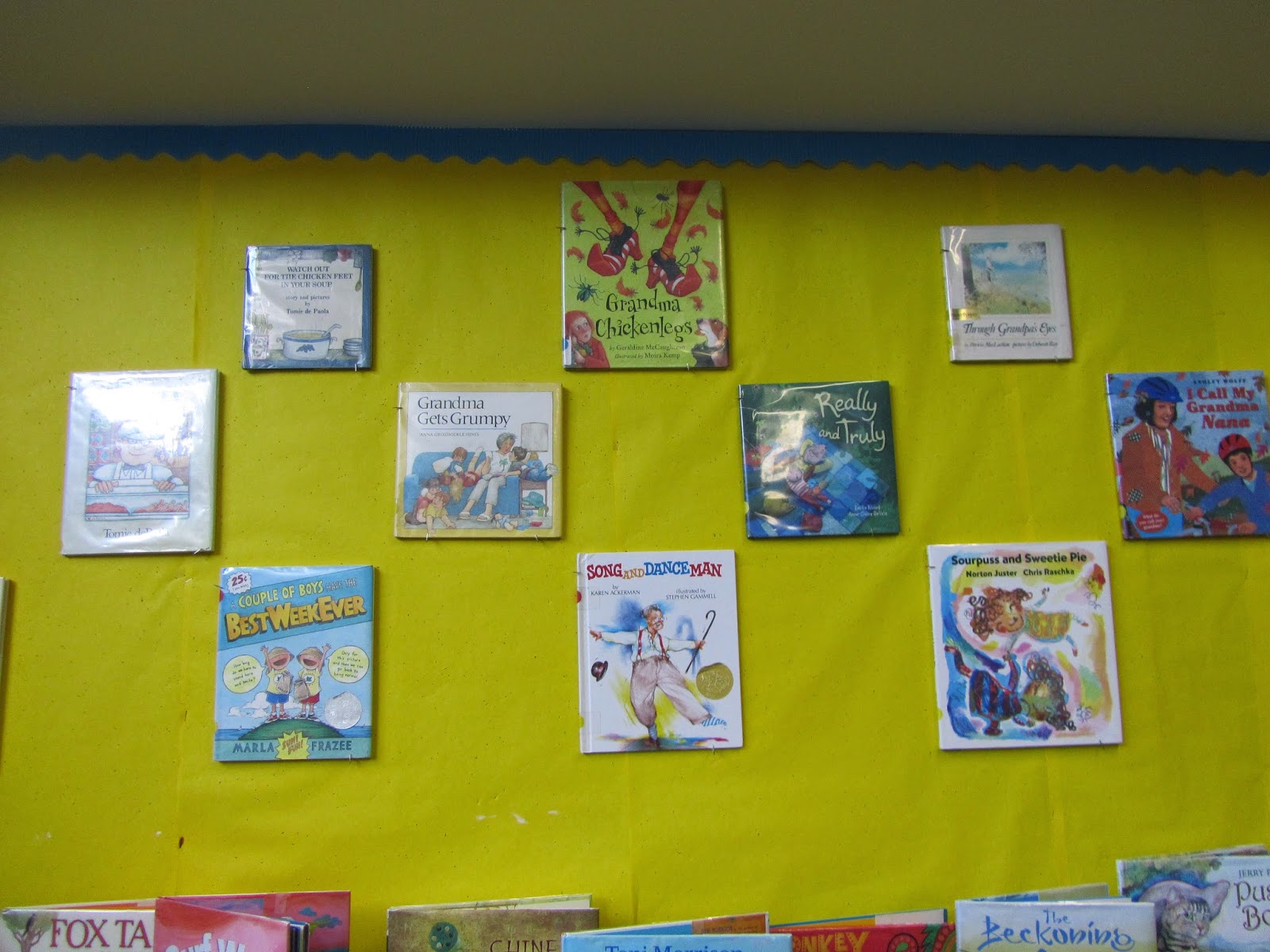 Posted by Marci Johnstone at 6:46 PM No comments: