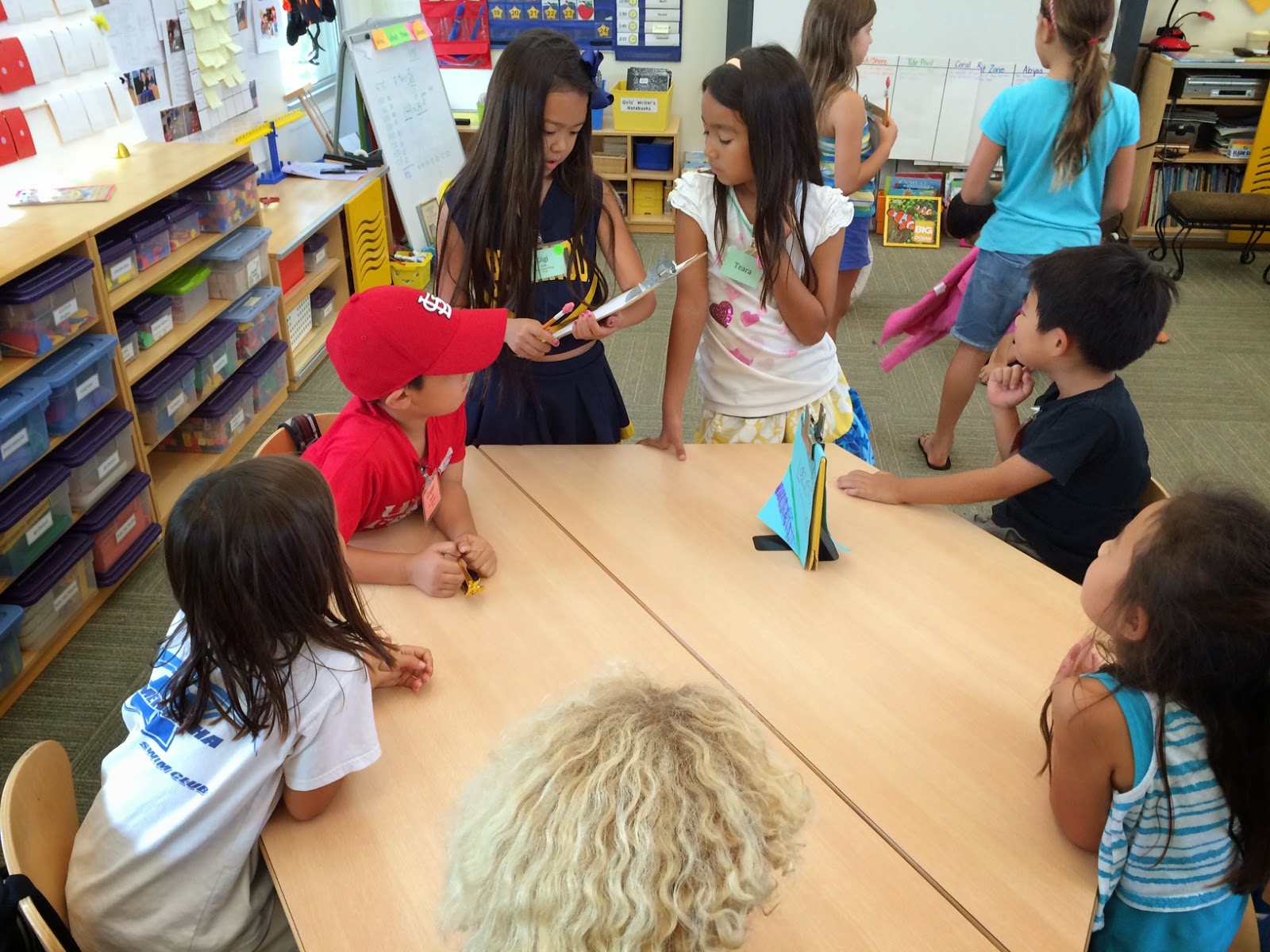 After determining what their non-negotiables were, the third graders had to come up with questions they wanted to ask the students they were interviewing. This was not an easy task, they were stumped at first but once the ball got rolling they did an amazing job. When a student suggested a question they were able to determine whether or not that was a question that was good for that age level. Since some of them were interviewing kindergarteners they realized that their questions had to be really clear and those who had older students had to make sure to take the question a bit deeper by asking the students why they felt a particular way. We also talked about what information they hoped to get by asking that question that they would then be able to put into their design. 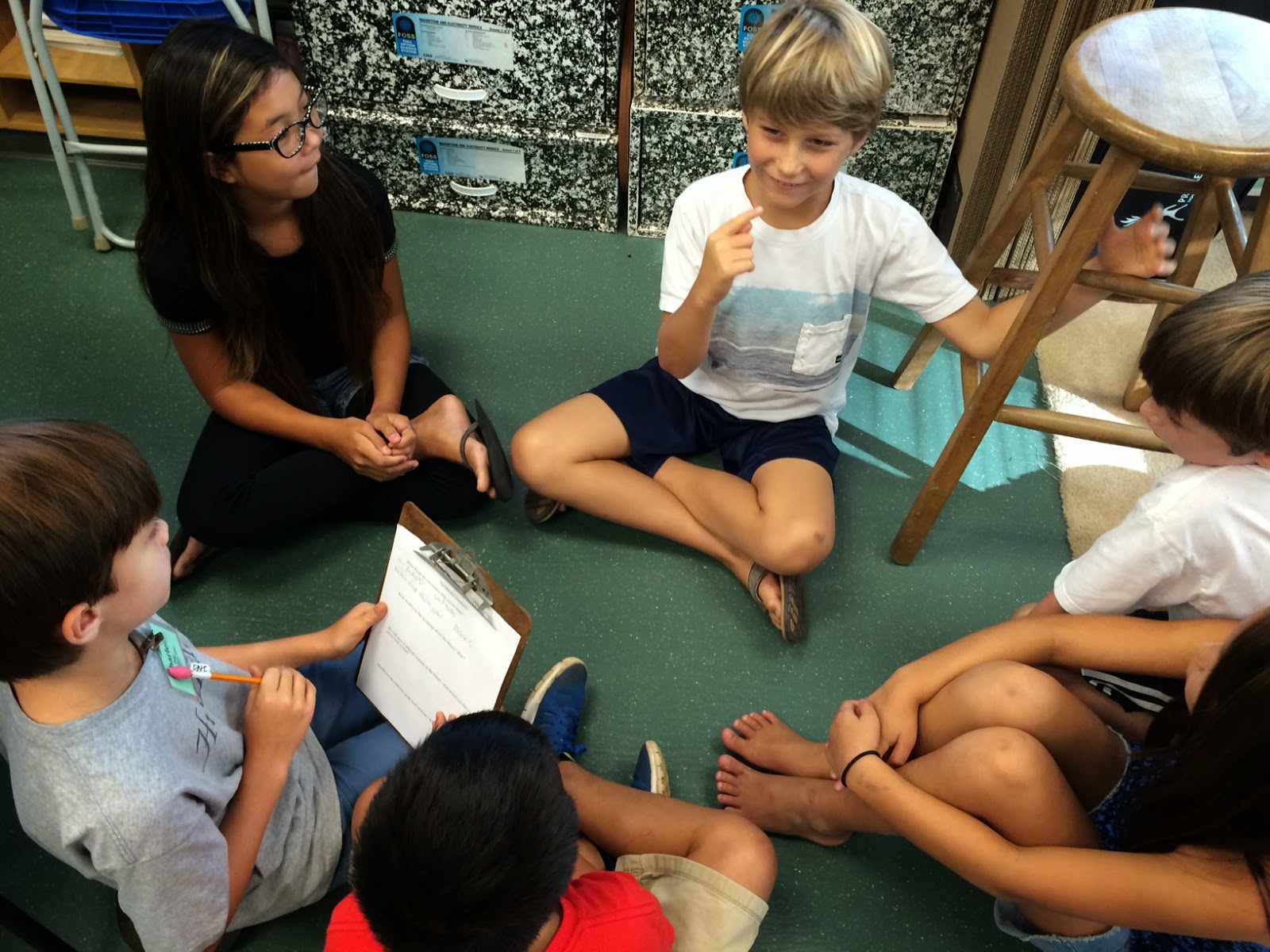 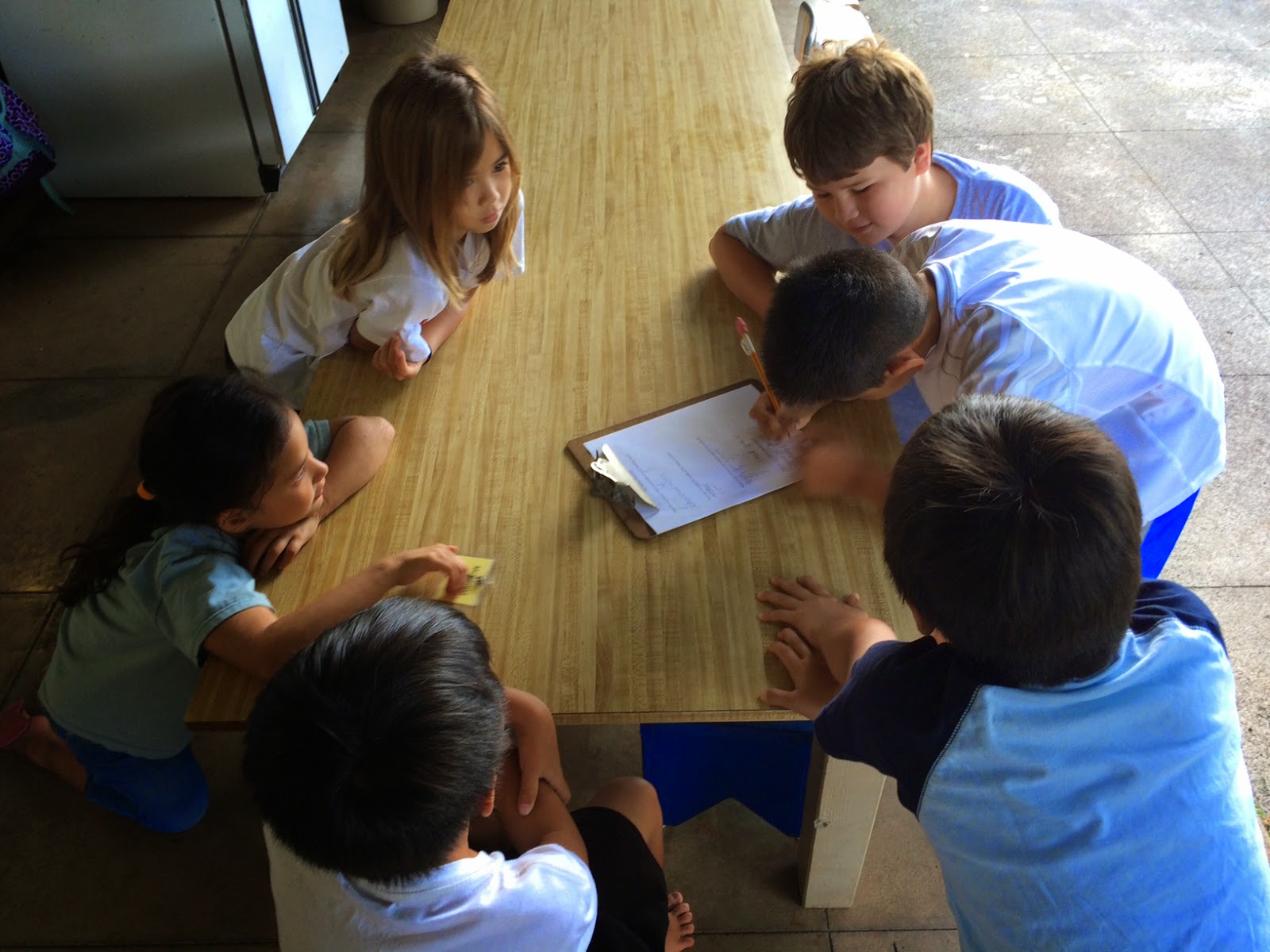 Anyone have experience putting a teleporter into your Learning Commons? Where can I get one and how much is it going to set me back? It turns out our students really want one. Another idea that came up repeatedly was bringing more of the outdoors into the indoors. I can't wait to see how the kids incorporate that into their design. As you can see the answers ran the gamut, some were a tad on the wild or silly side while others were really very thoughtful.

Next step: I have gone through all the responses each class got and put them together on a Google doc. As we meet this week, students will be going through the answers, grouping items, looking for commonalities and determining what is important for each grade level. Stay tuned! 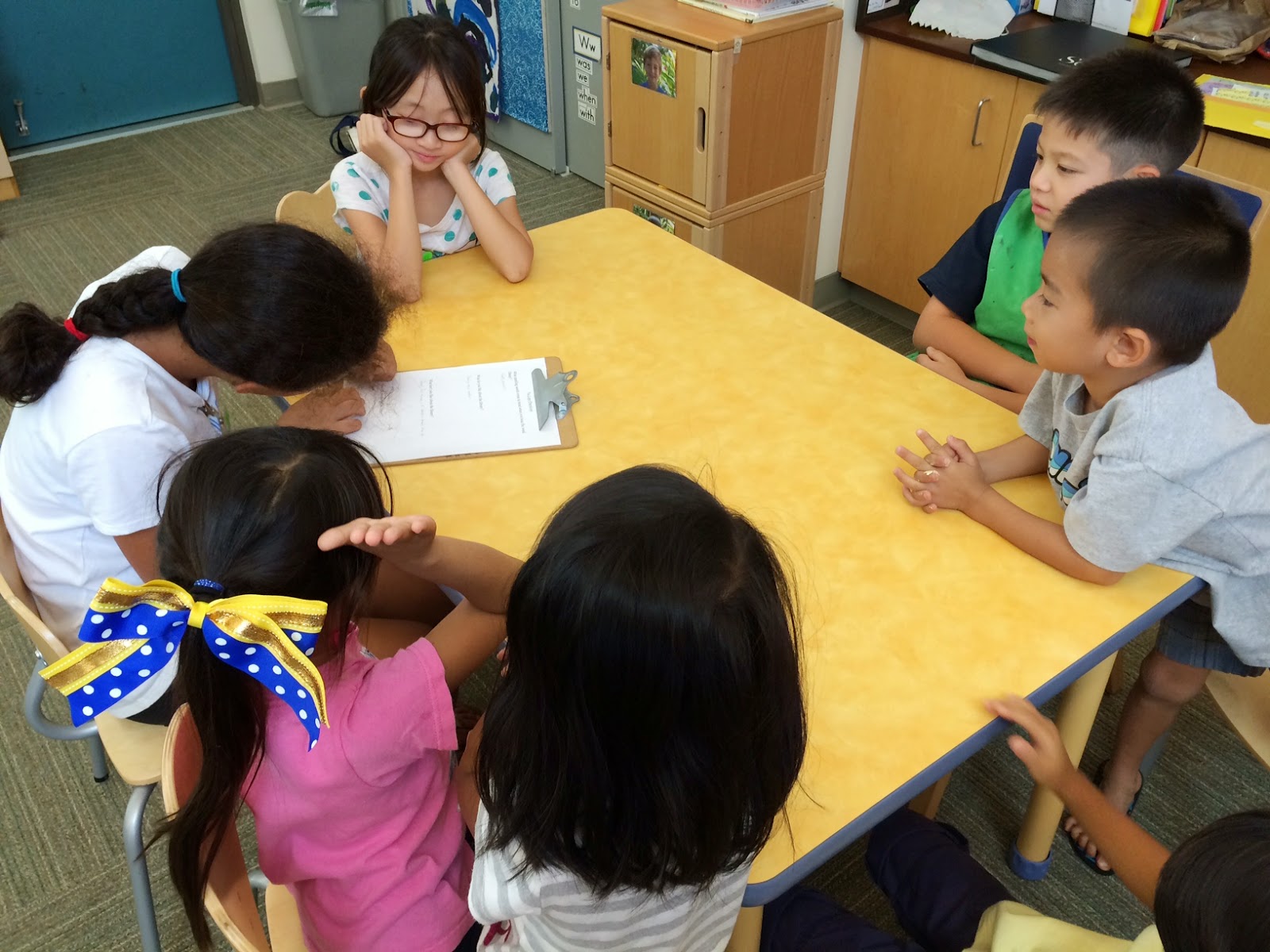 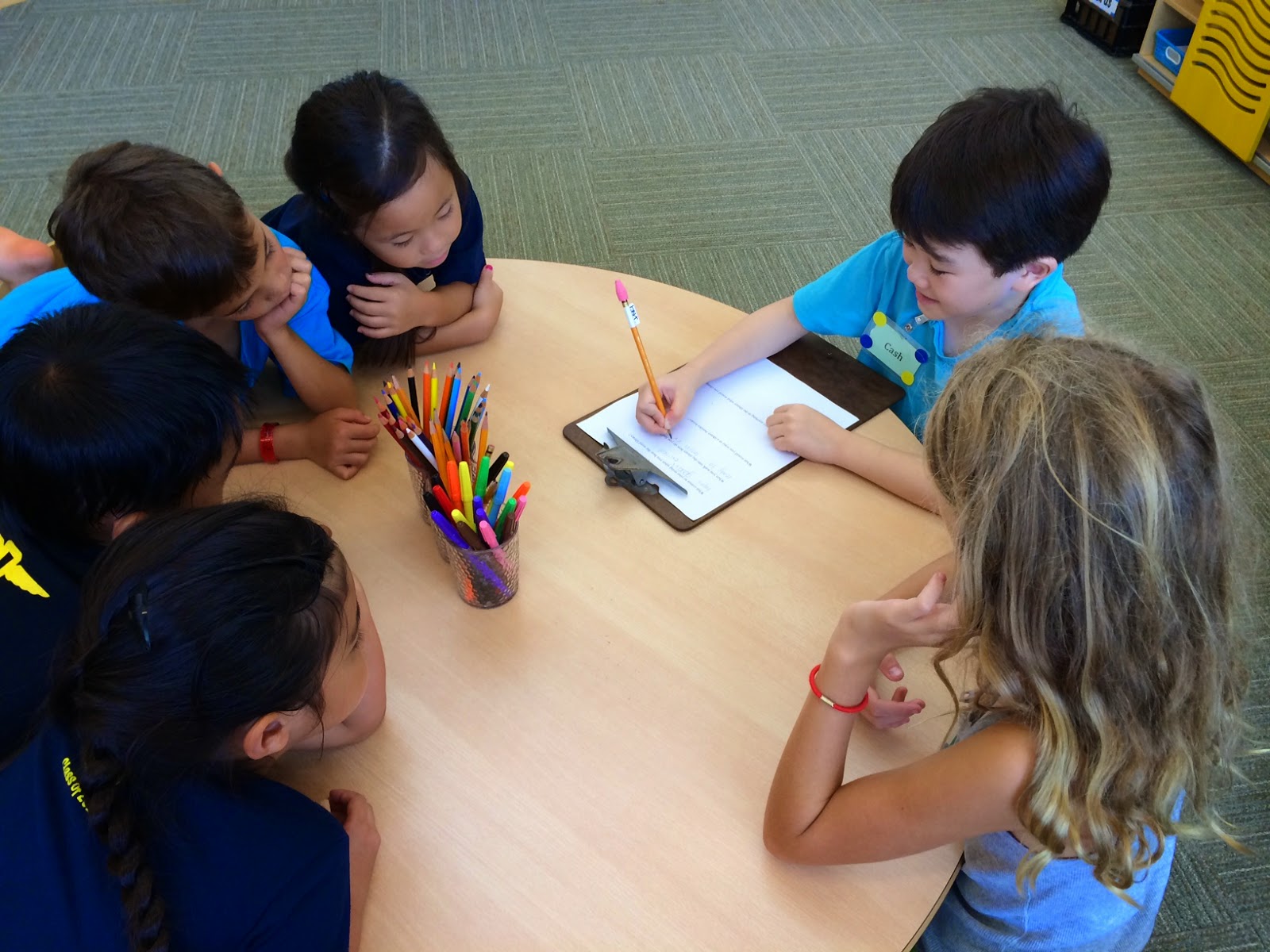 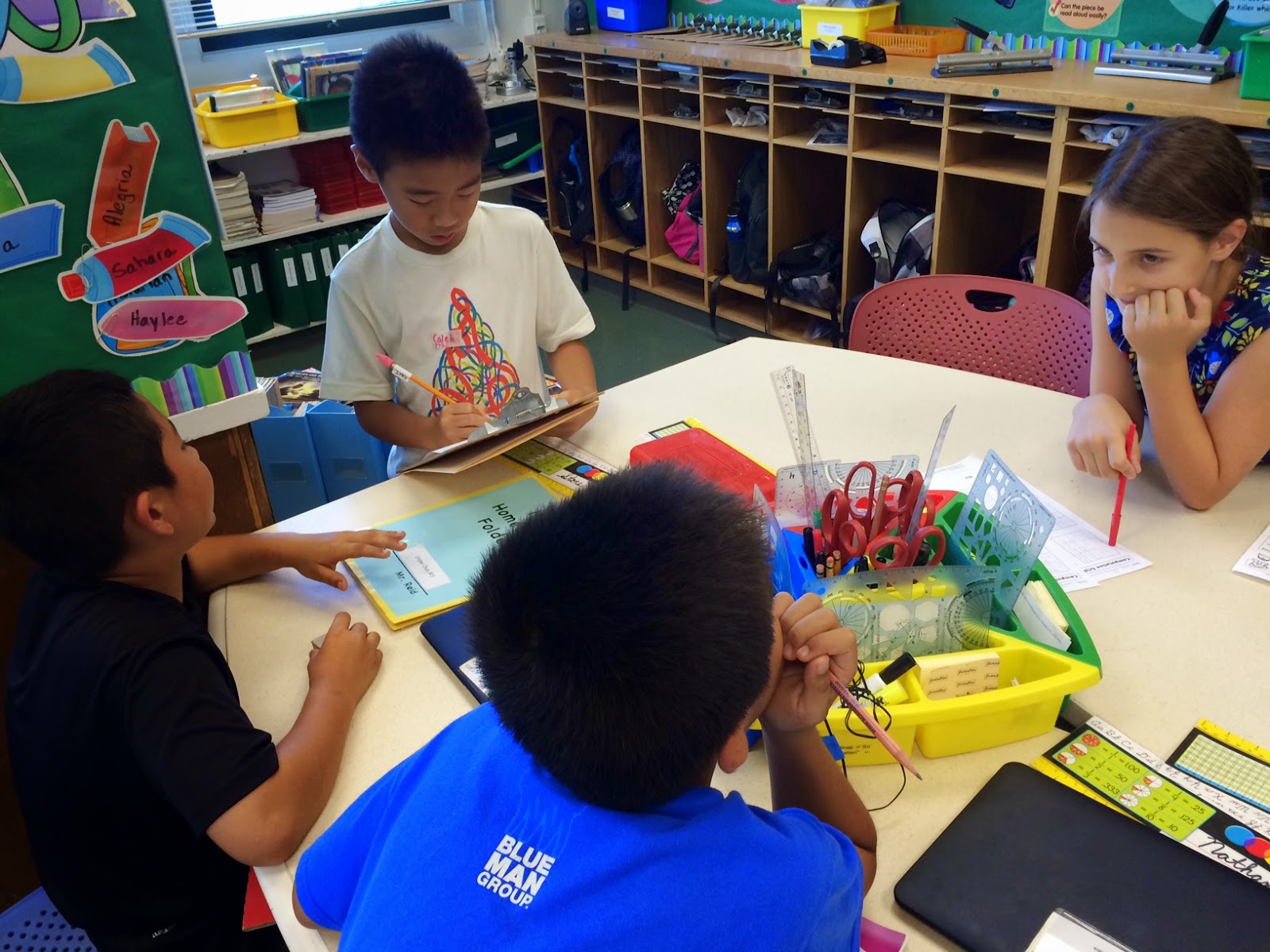 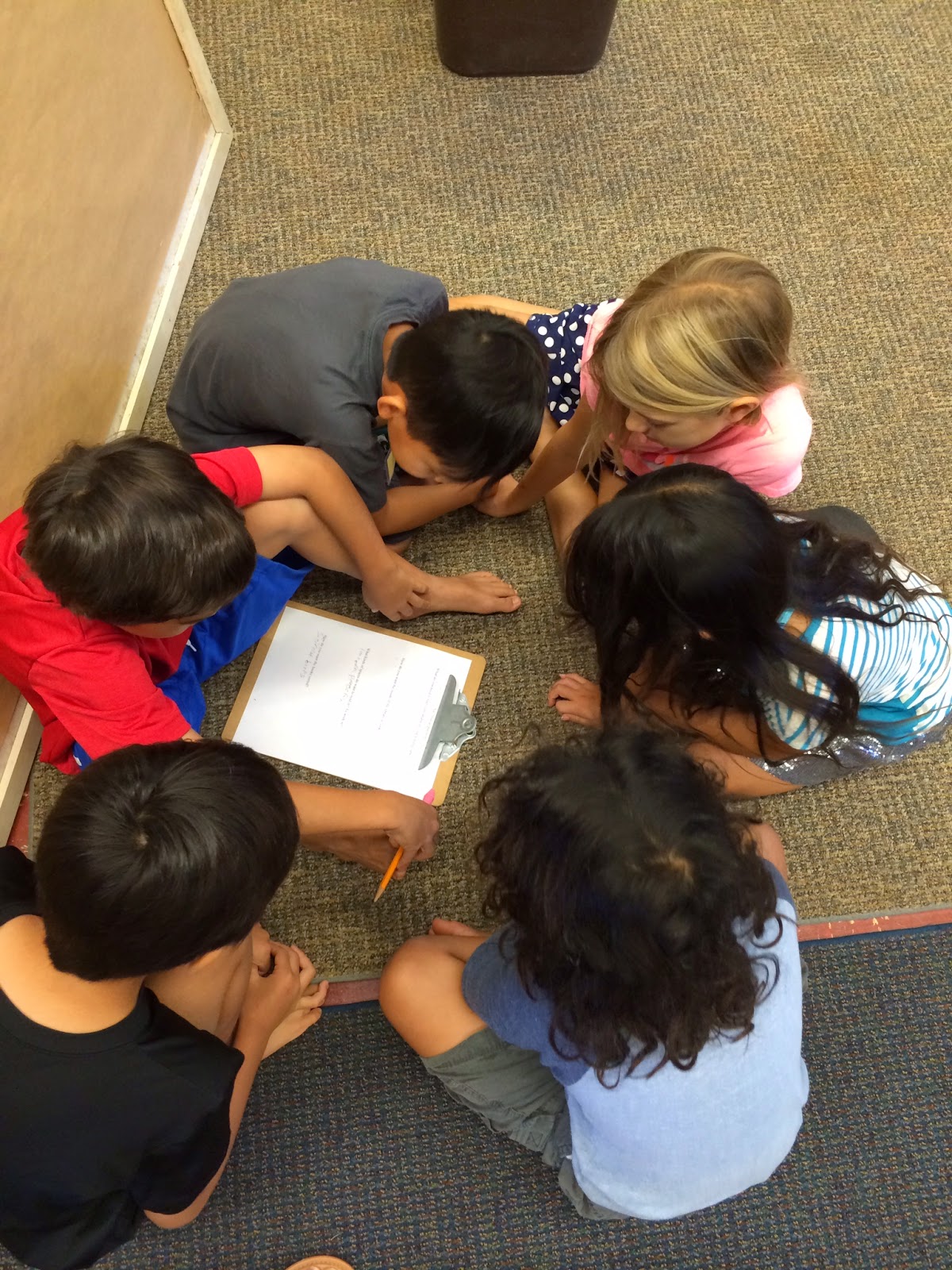 Posted by Marci Johnstone at 12:06 PM No comments:

Walking and Listening to "Al Capone Does My Homework"

Ahhh..Alcatraz, who isn't fascinated by this prison? Tourist, including myself, have been visiting this prison for years. In fact the reason I really wanted to visit it a few years back was because of Gennifer Choldenko's book Al Capone Does My Shirts. Up to that point I had no idea that the prison employees and their families had lived there. I thought only prisoners resided on the island.

Moose's father has just been made Associate Warden at Alcatraz, putting him second in command. This puts additional pressure onto Moose's family and wanting to know more about what this means for him, Moose visits Piper, the Warden's daughter. Piper tells him how the prisoners target the guards and wardens and explains the point system they have in place for things done to guards i.e. 10 points for spitting on a guard and up to 5,000 points for killing a warden. One evening Moose's parents head out with the warden to celebrate his promotion leaving Moose in charge of his autistic sister Natalie. While Moose's parents are gone, their apartment erupts into flames. Some people who live on the island blame Natalie since they don't fully understand or accept her because she is different from them.  Others on the island find the fire and the timing of it rather suspicious. Moose and his friends decide to take matters into their own hands to see if they can determine what really happened and who was behind it all. From there the stories takes several unexpected twists and turns that involve a hidden note, money laundering, a message from Al Capone and a stabbing. I loved it all!
Side note: Make sure you stick around for the author's note, it is extremely informative and super interesting.

Kirby Heyborne has narrated all of the books in the Alcatraz series and while this was the first opportunity I had to listen to an Alcatraz book (I had read the others), I must say I enjoyed his narration. His pacing was nice and the desperation in Moose's voice both when calling the Warden's office to demand a meeting and his calling out to his father when he realized what Indiana was about to do to his father felt incredibly genuine and in the moment. While there was little differentiation between character voices, I must say his vocalization of loved Al Capone was my favorite.

As I was walking I was luckily able to escape this fierce rhino totally unscathed. Phew! 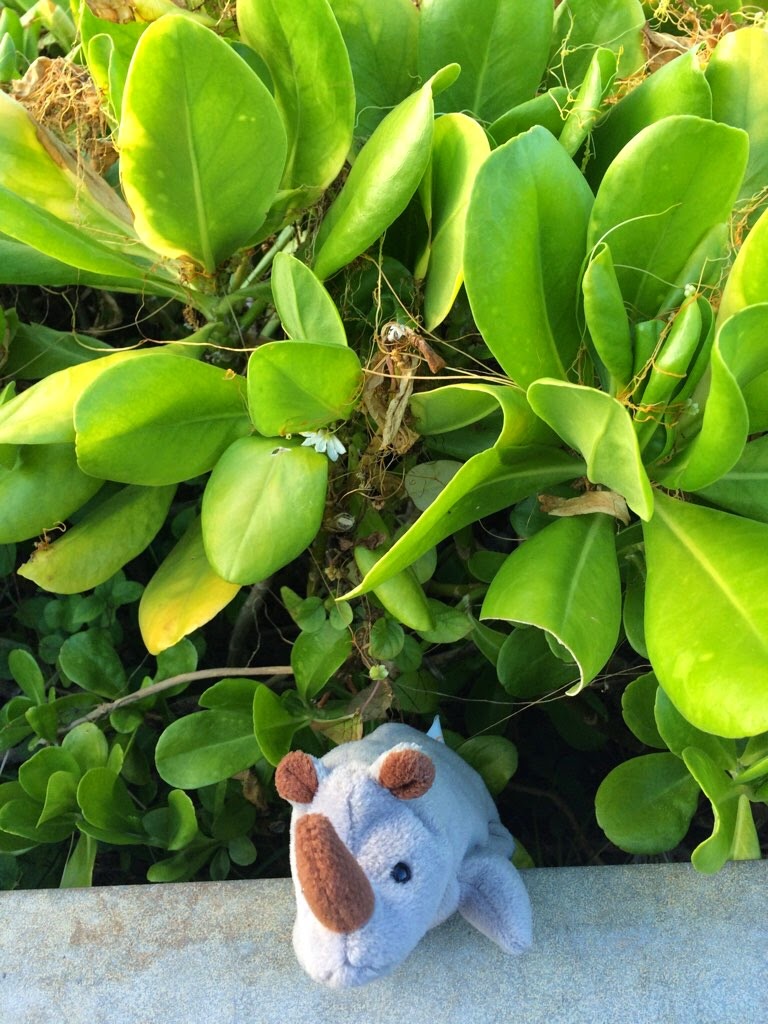 Posted by Marci Johnstone at 7:07 PM No comments: 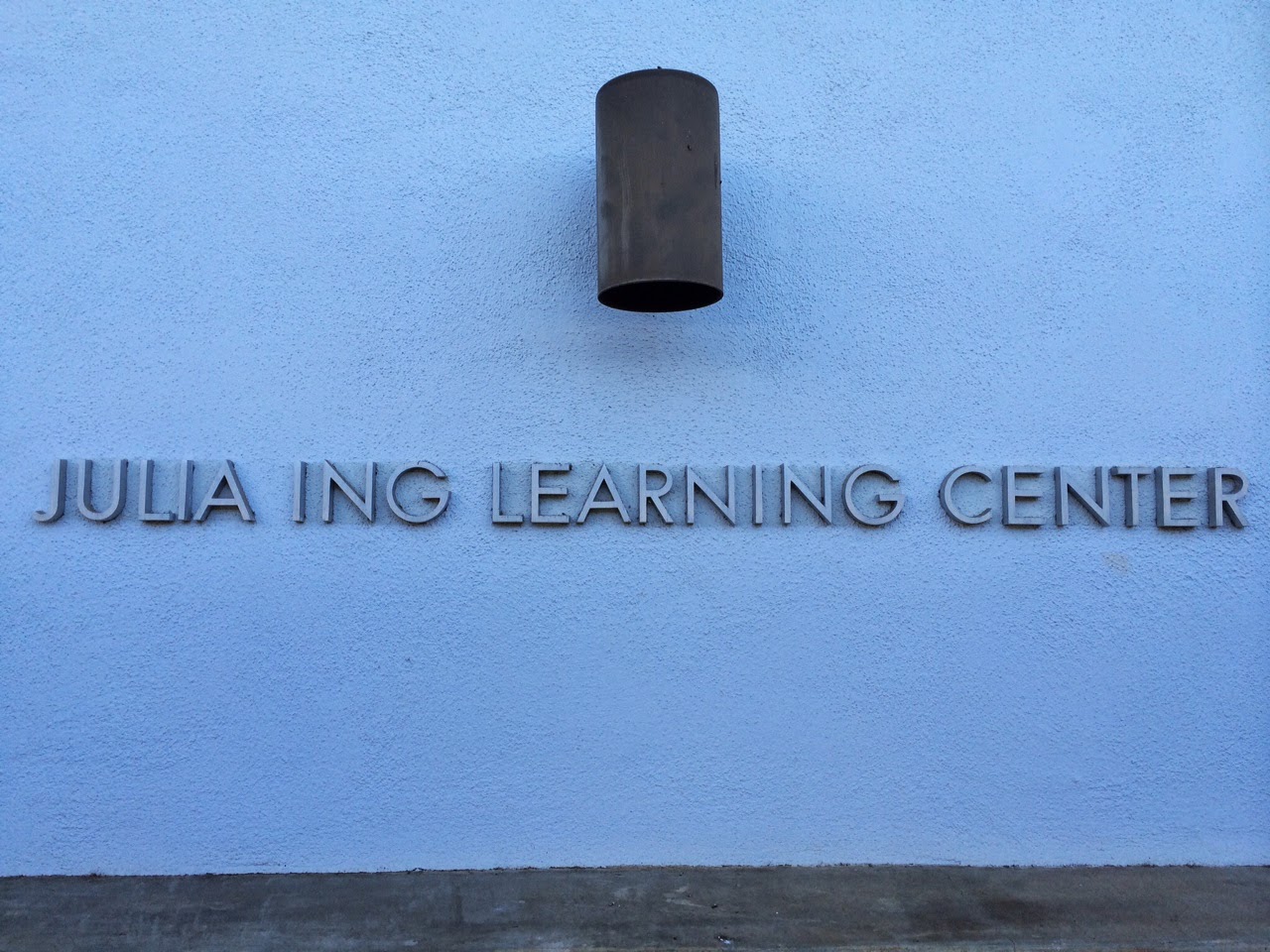 Big changes are coming! As I have mentioned before big changes are taking place in libraries all over the world and that the library I work in is no exception. Over the next few years we will be transforming our current space by adding onto the existing building, welcoming additional grade levels into the space and building multiple maker spaces. The design, which unfortunately I can't unveil, is amazing.

When I announced to the 3rd grade students last cycle that they were going to be involved in the design of the new library space they were beside themselves and thought it was the coolest thing ever that their voices and ideas could be heard. I shared with them that this design process was going to take us quite some time, probably up to Christmas Break, and would involve a lot of different steps along the way.

Part One: What are your non-negotiables?
Each class worked on creating a list of things that they could not live without in the new library space. It has been interesting to see not only what is important to them but the level of detail that they went into. These features that they discussed will need to be incorporated somehow in their design. 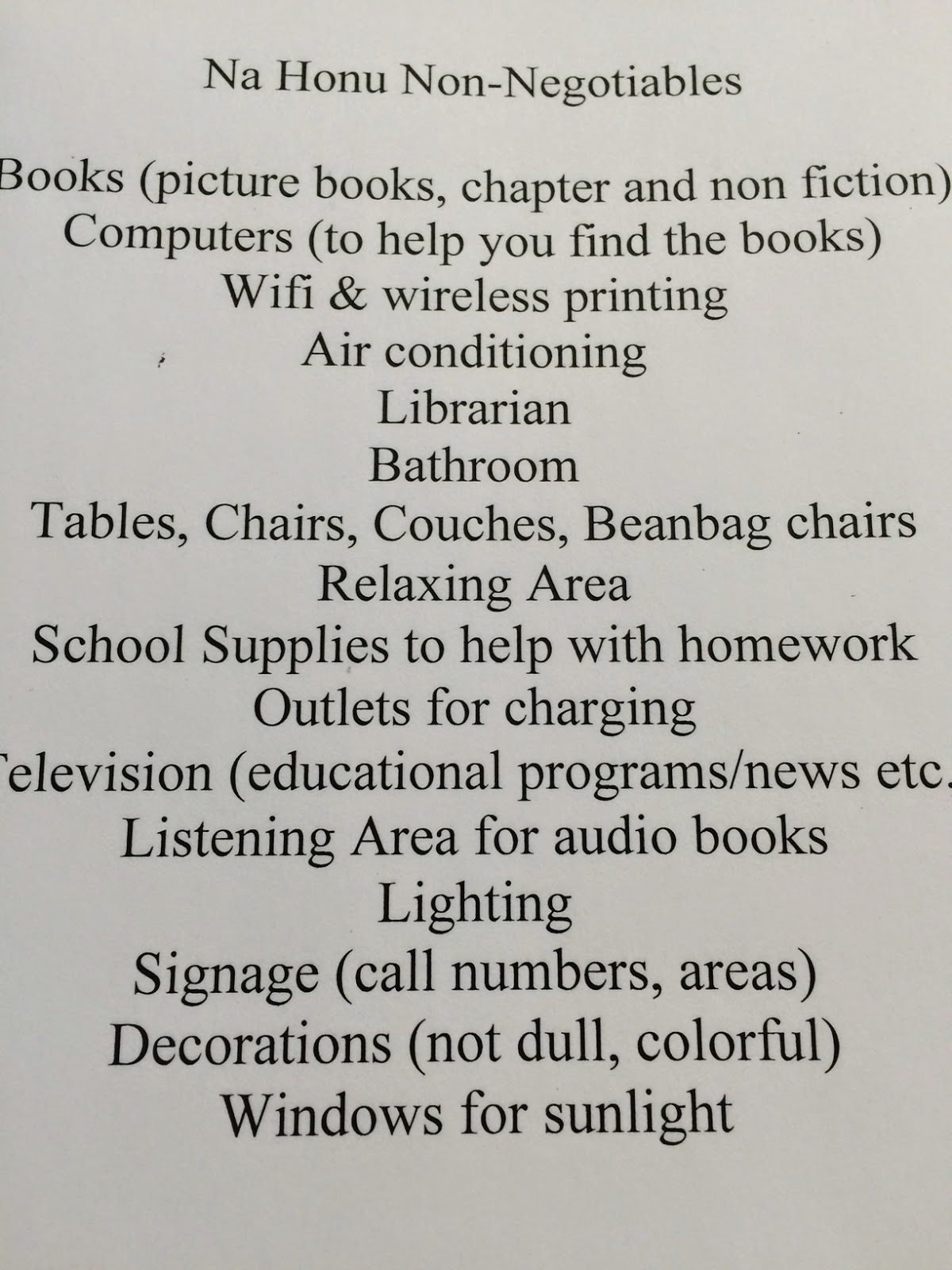 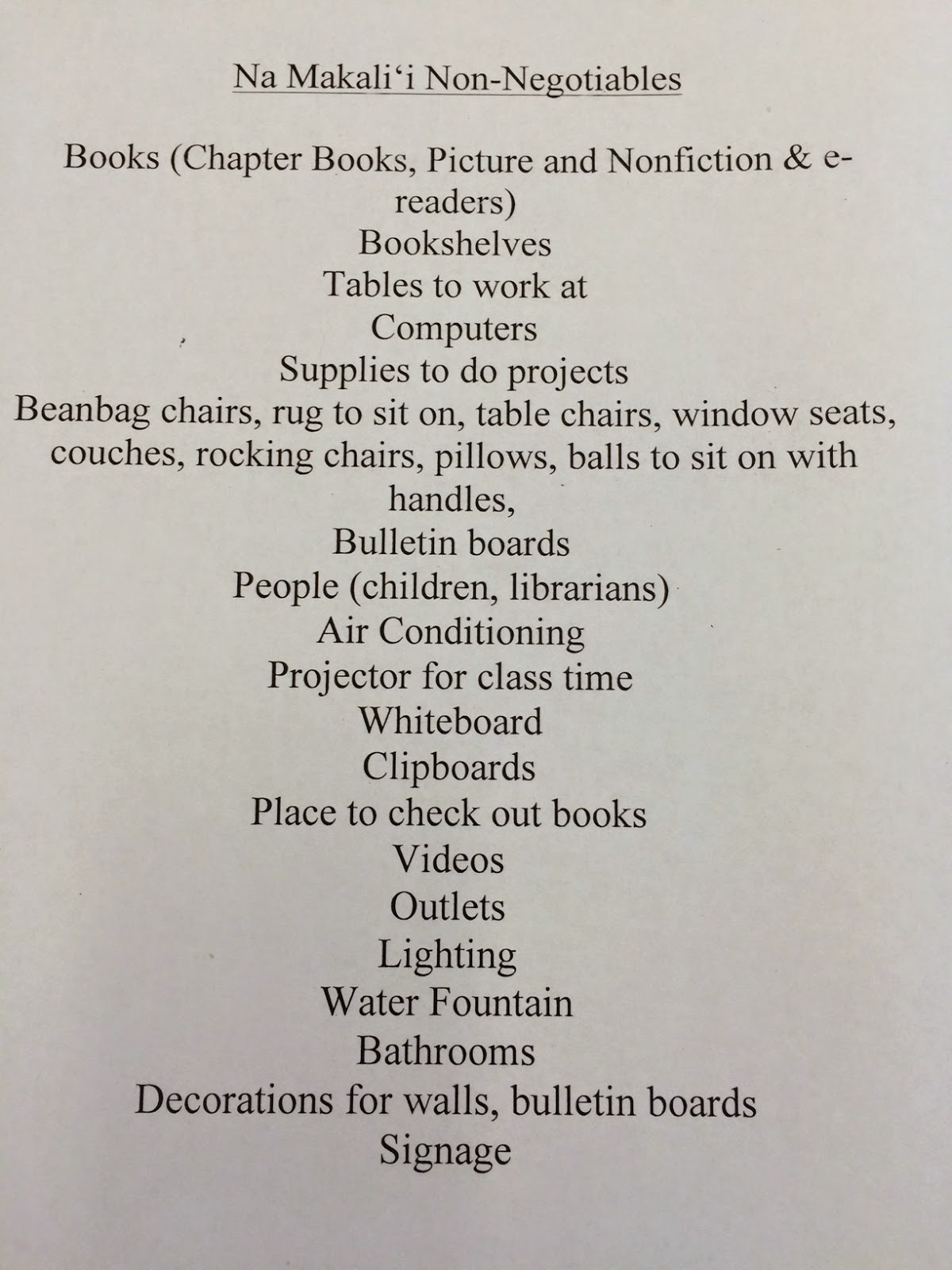 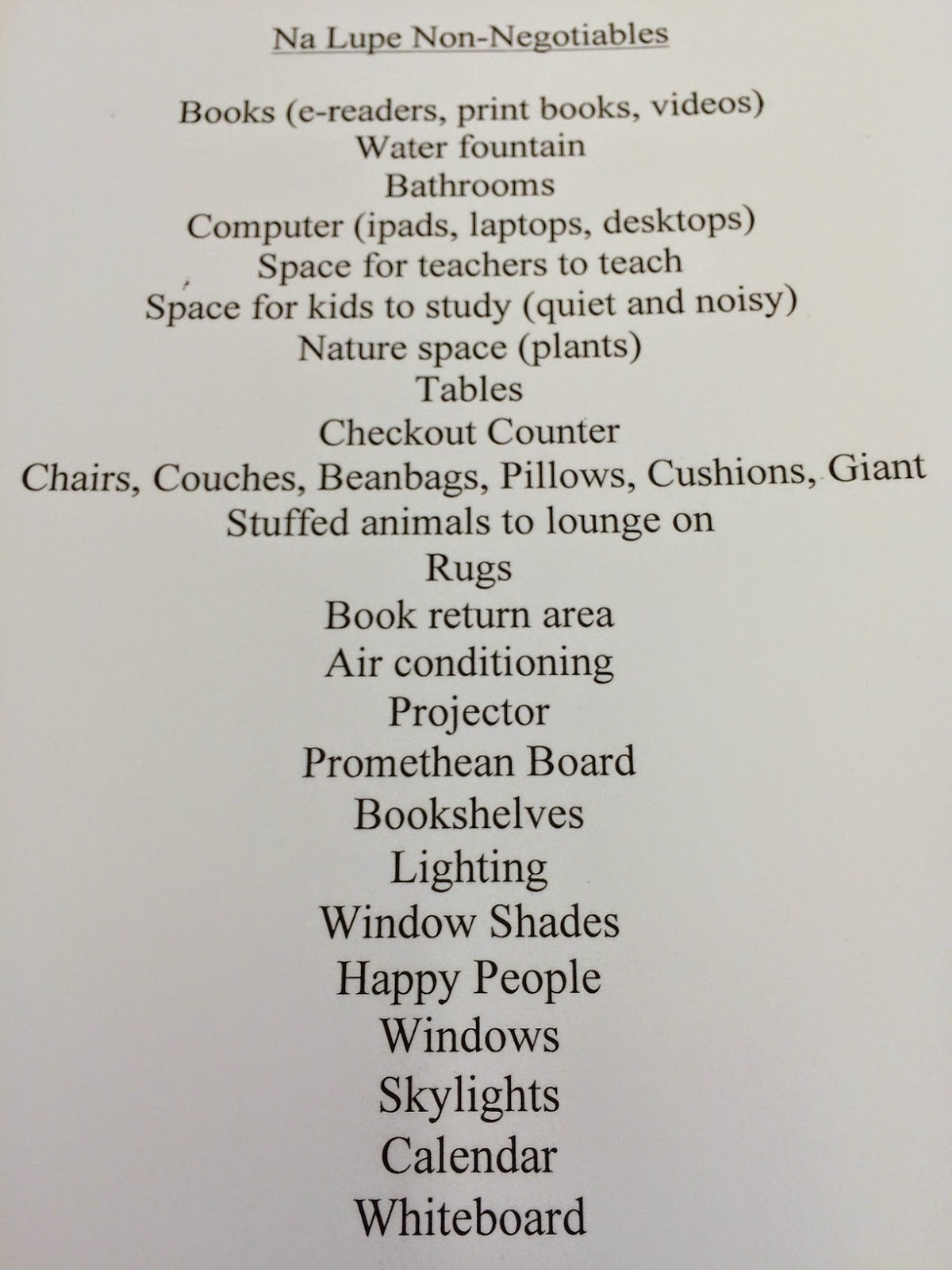 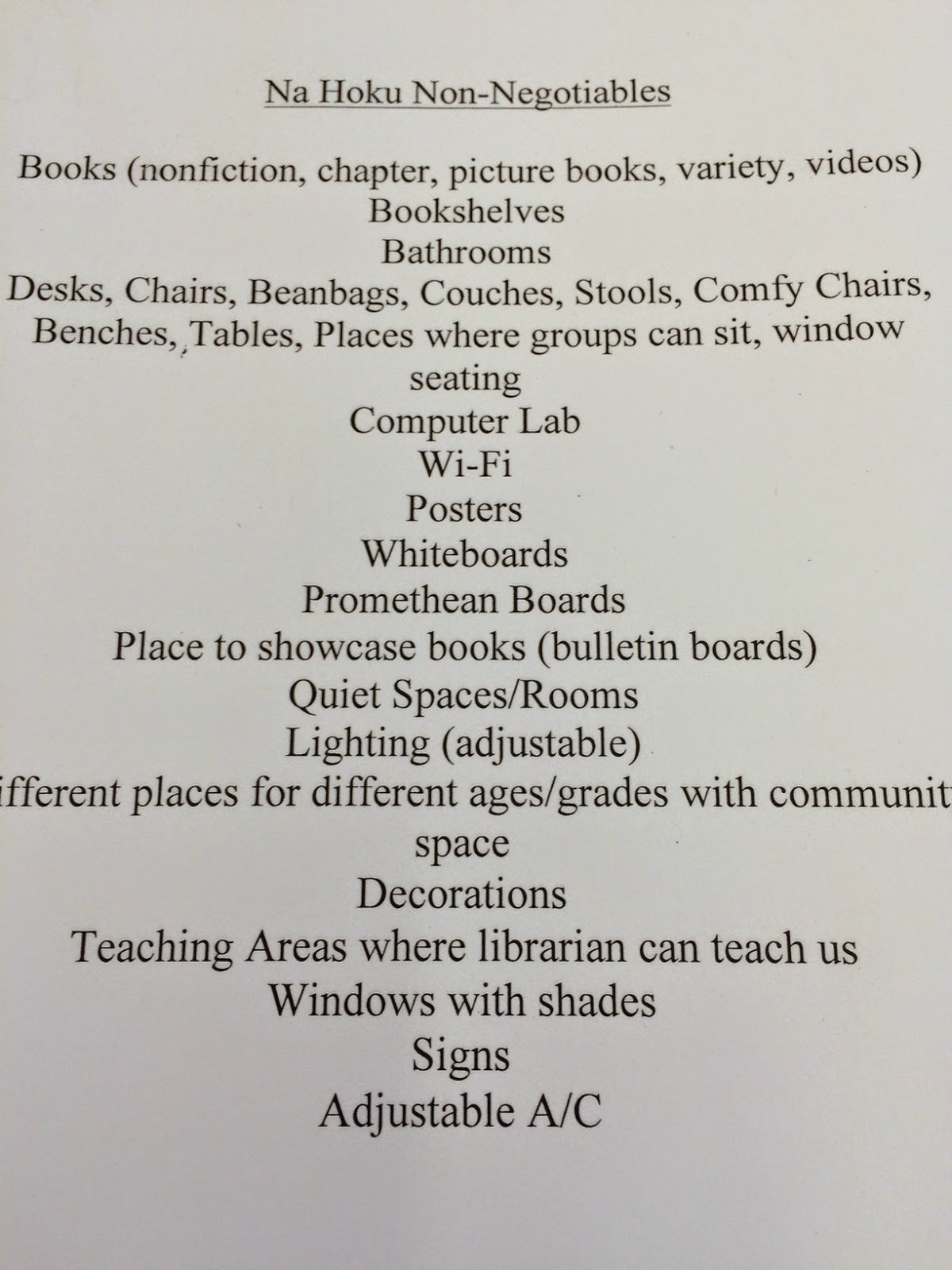 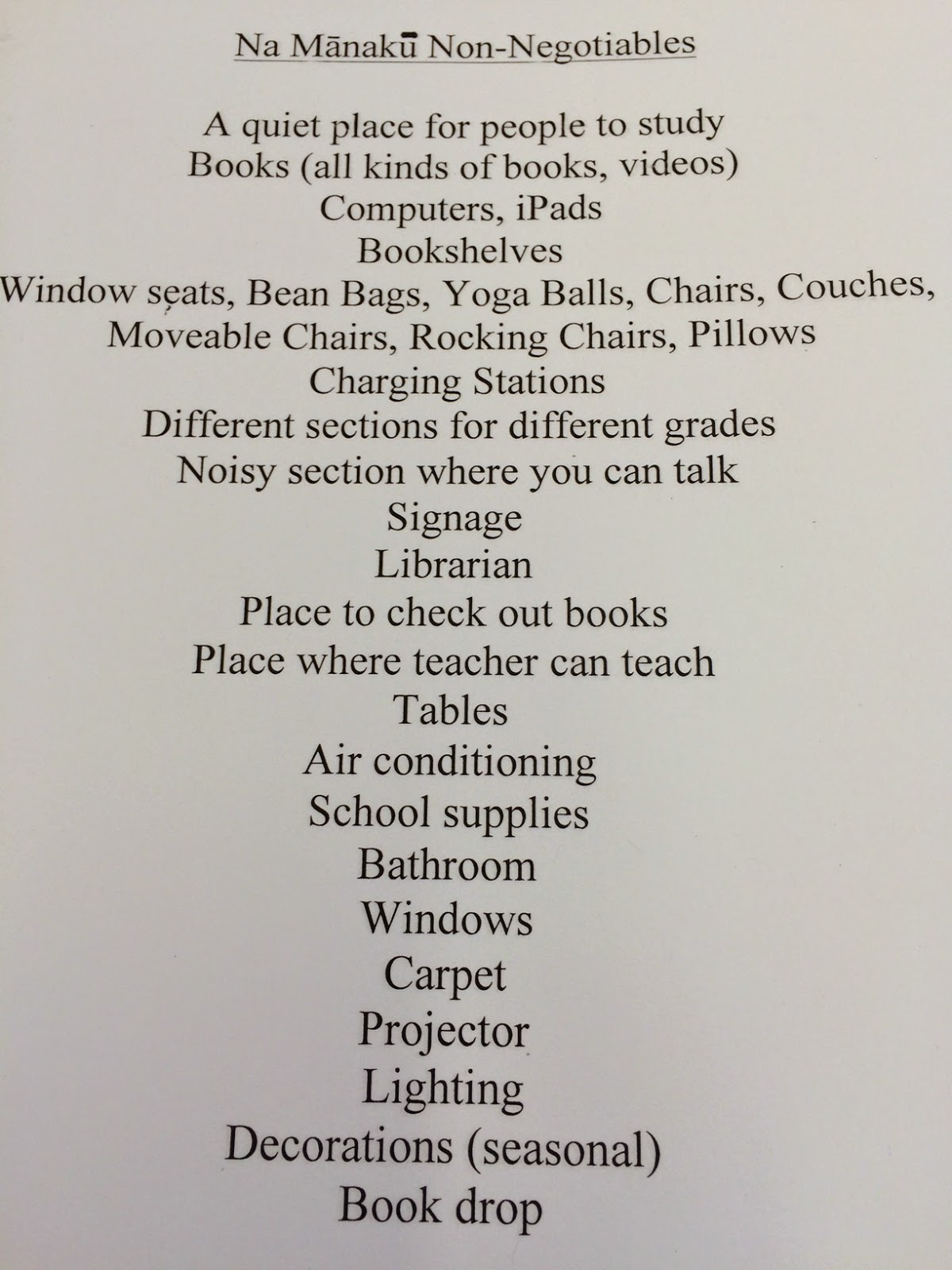 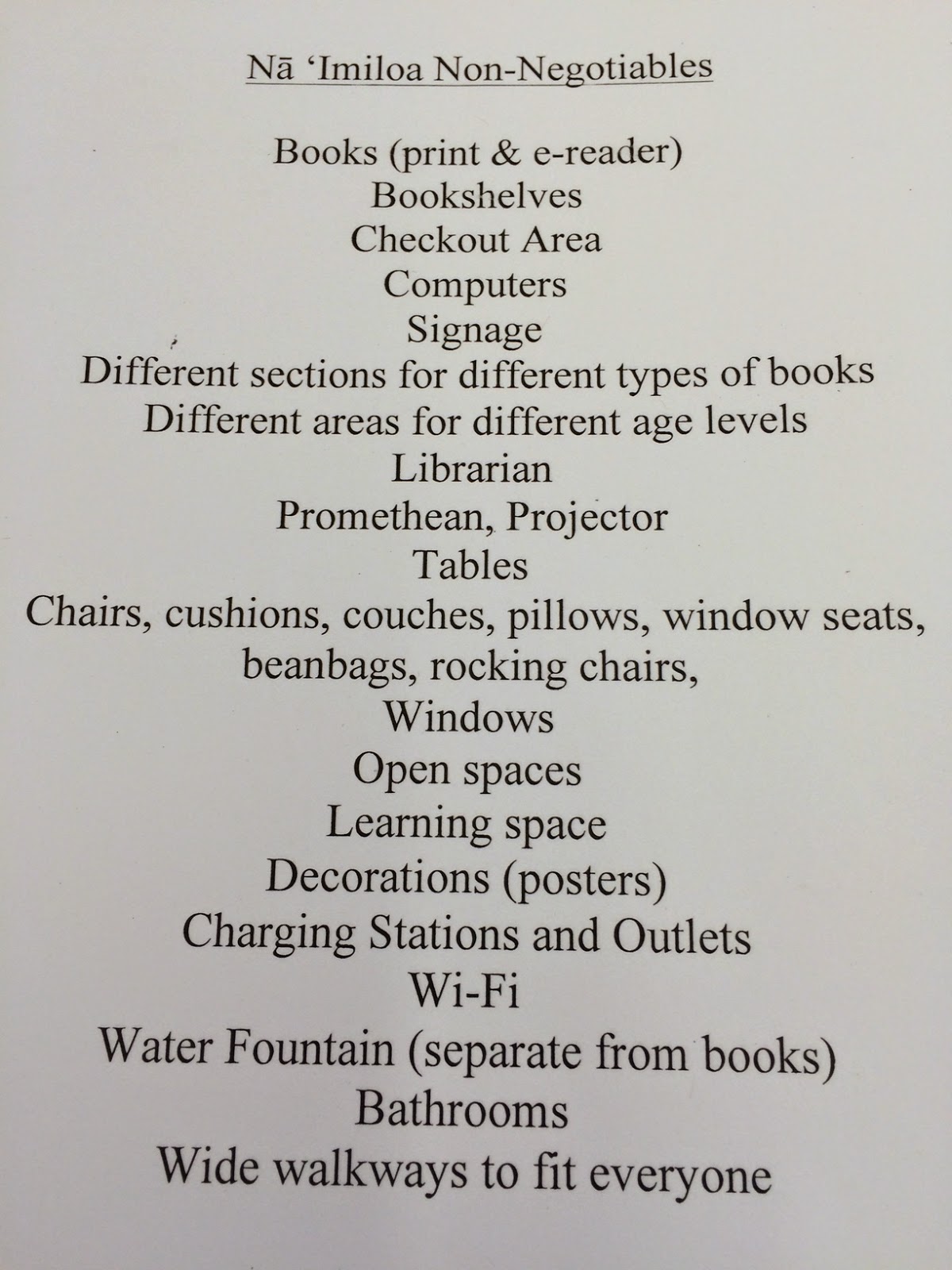 
Posted by Marci Johnstone at 10:17 AM No comments:

Halloween....who doesn't love it? Every year I tend to go a bit crazy with the Halloween decorations and our bulletin boards are no exception.

Our giant bulletin board: "Witch book will you choose?" This picture doesn't even come close to capturing the amazing job my co-worker did on this. 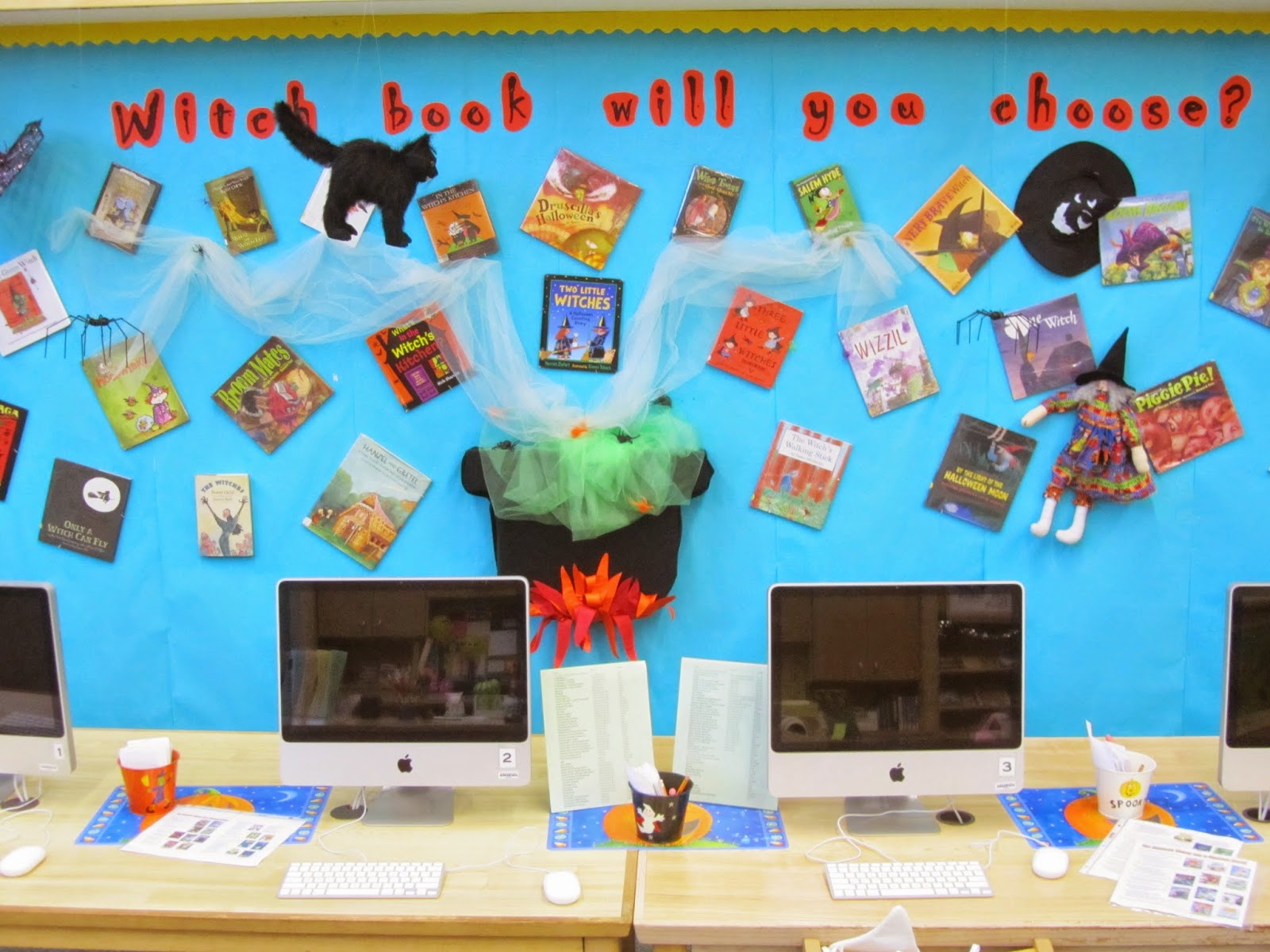 Poor Greg, he doesn't look thrilled about having this spider on his head. However, he is rocking some pumpkin bling. 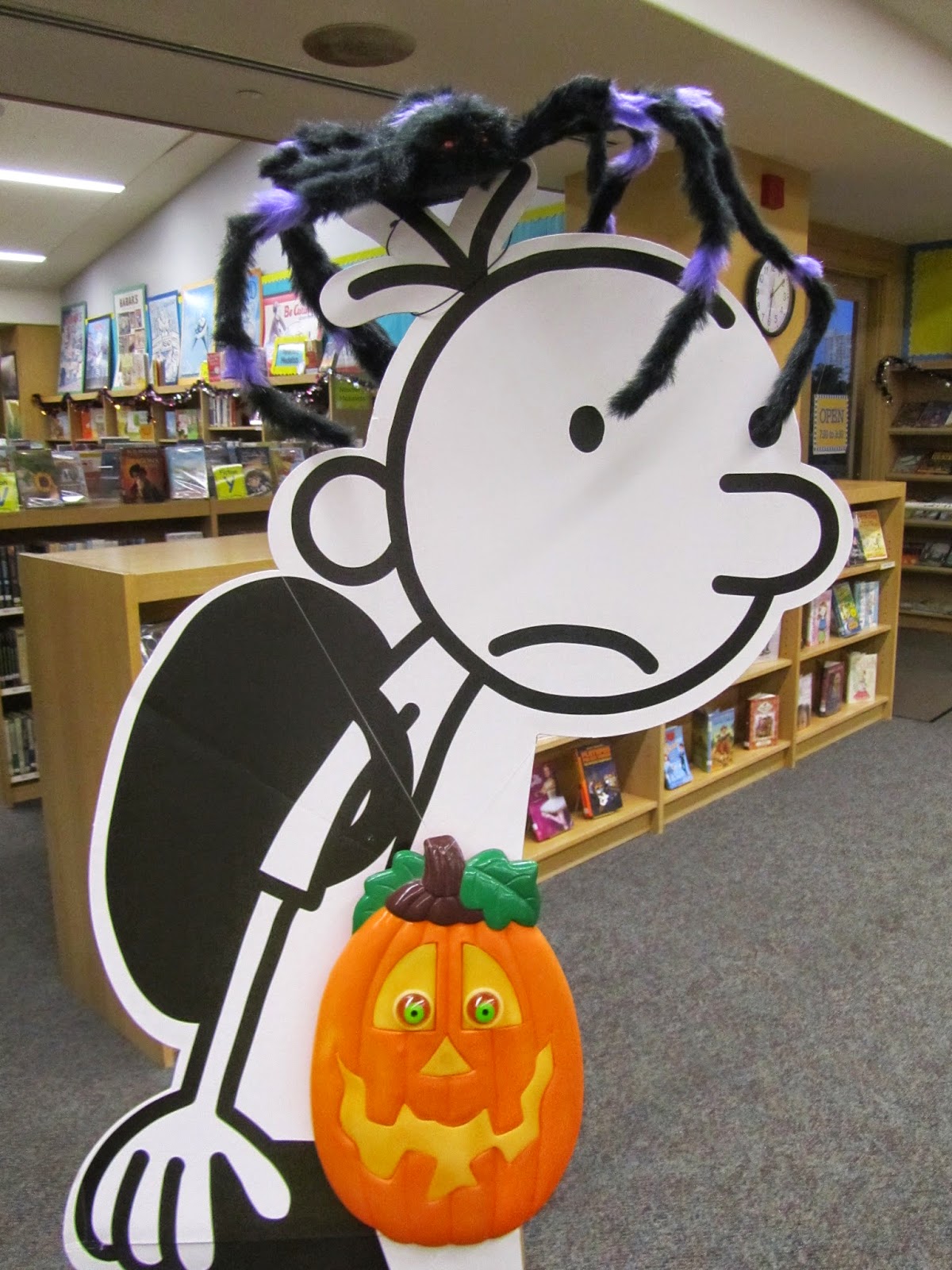 One of giant bulletin boards is featuring everyone's favorite dance, The Monster Mash 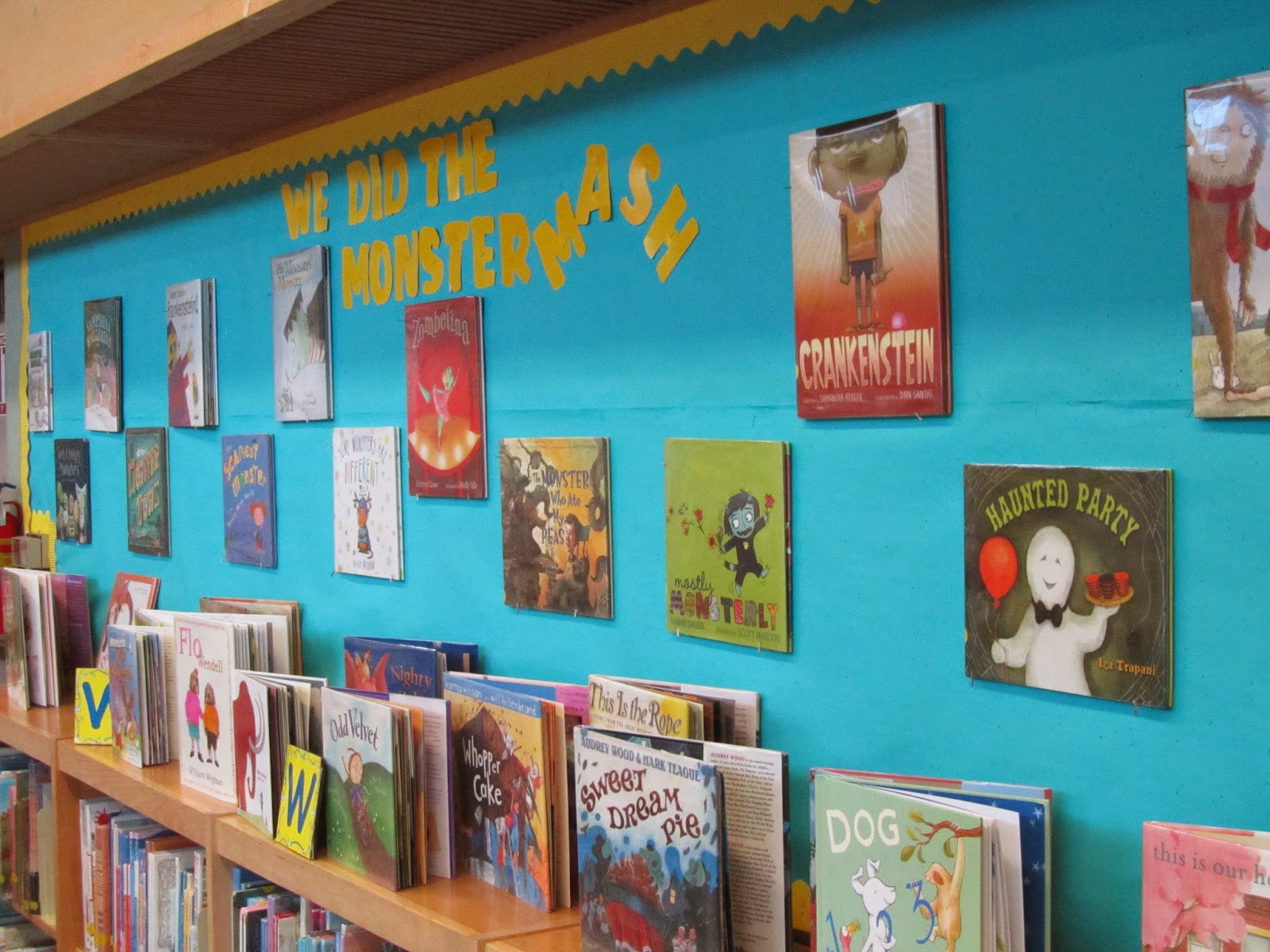 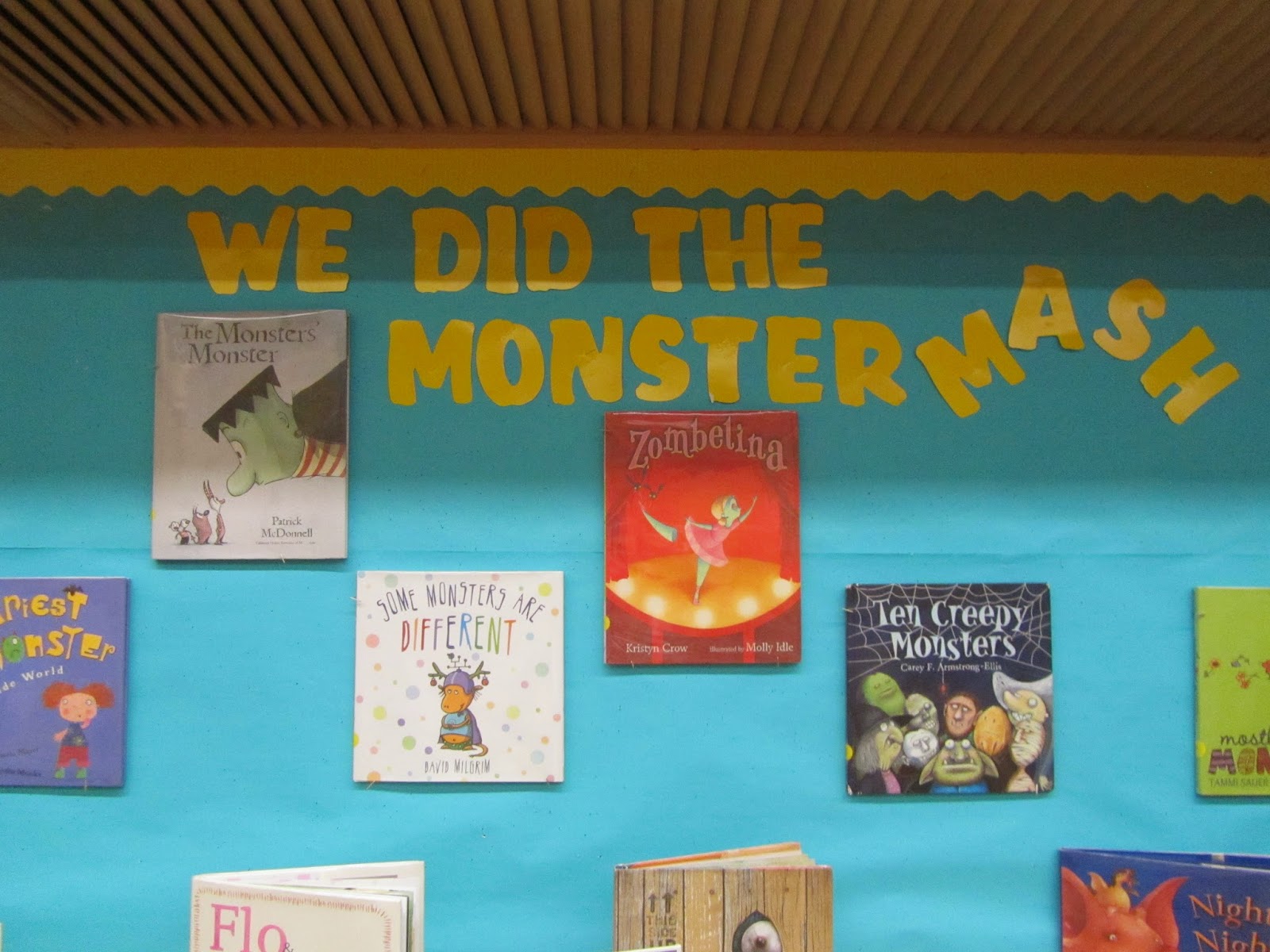 Who doesn't love Oliver Jeffers? Happy birthday to him! 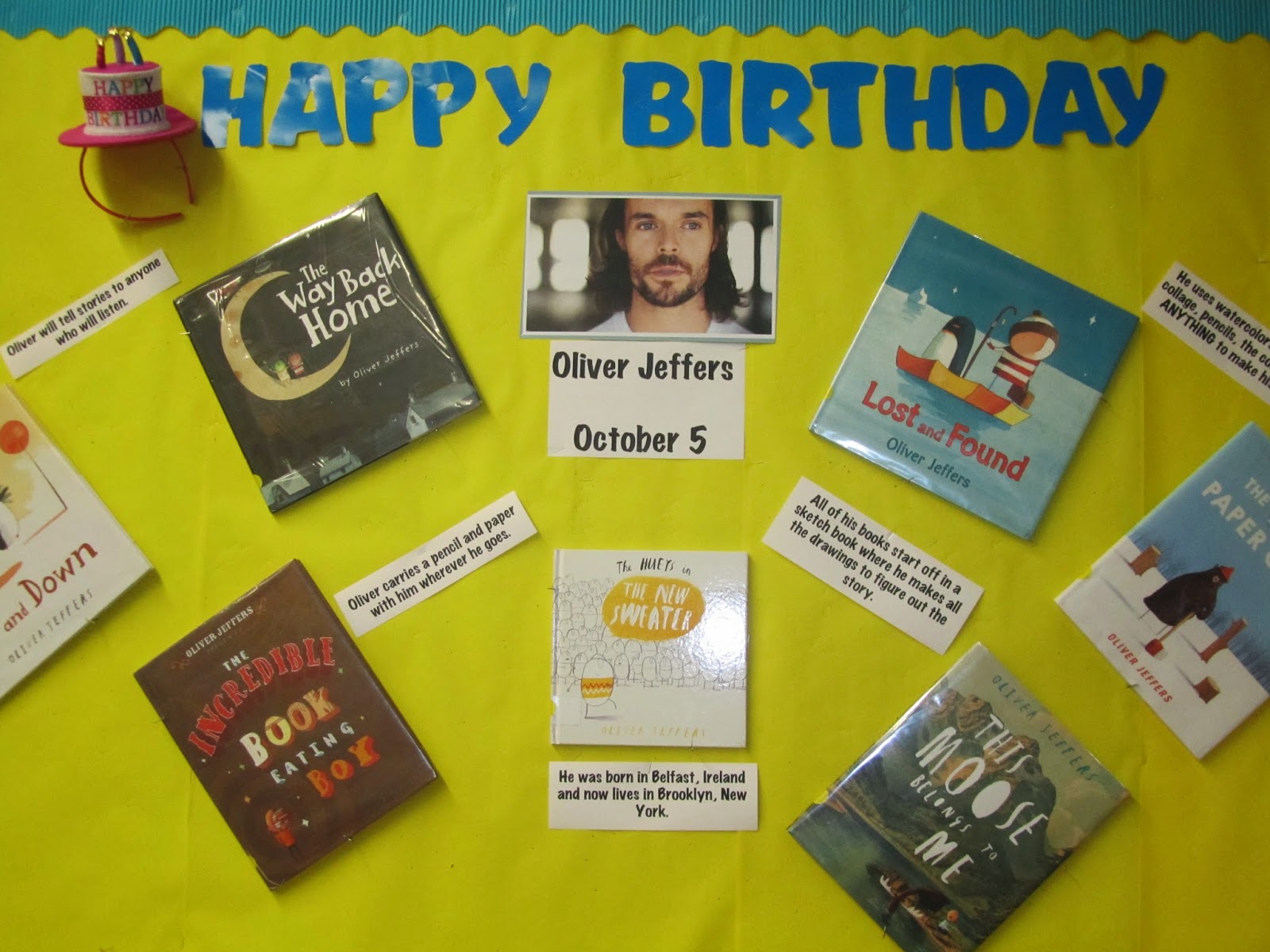 Another of our side bulletin boards celebrating pumpkins 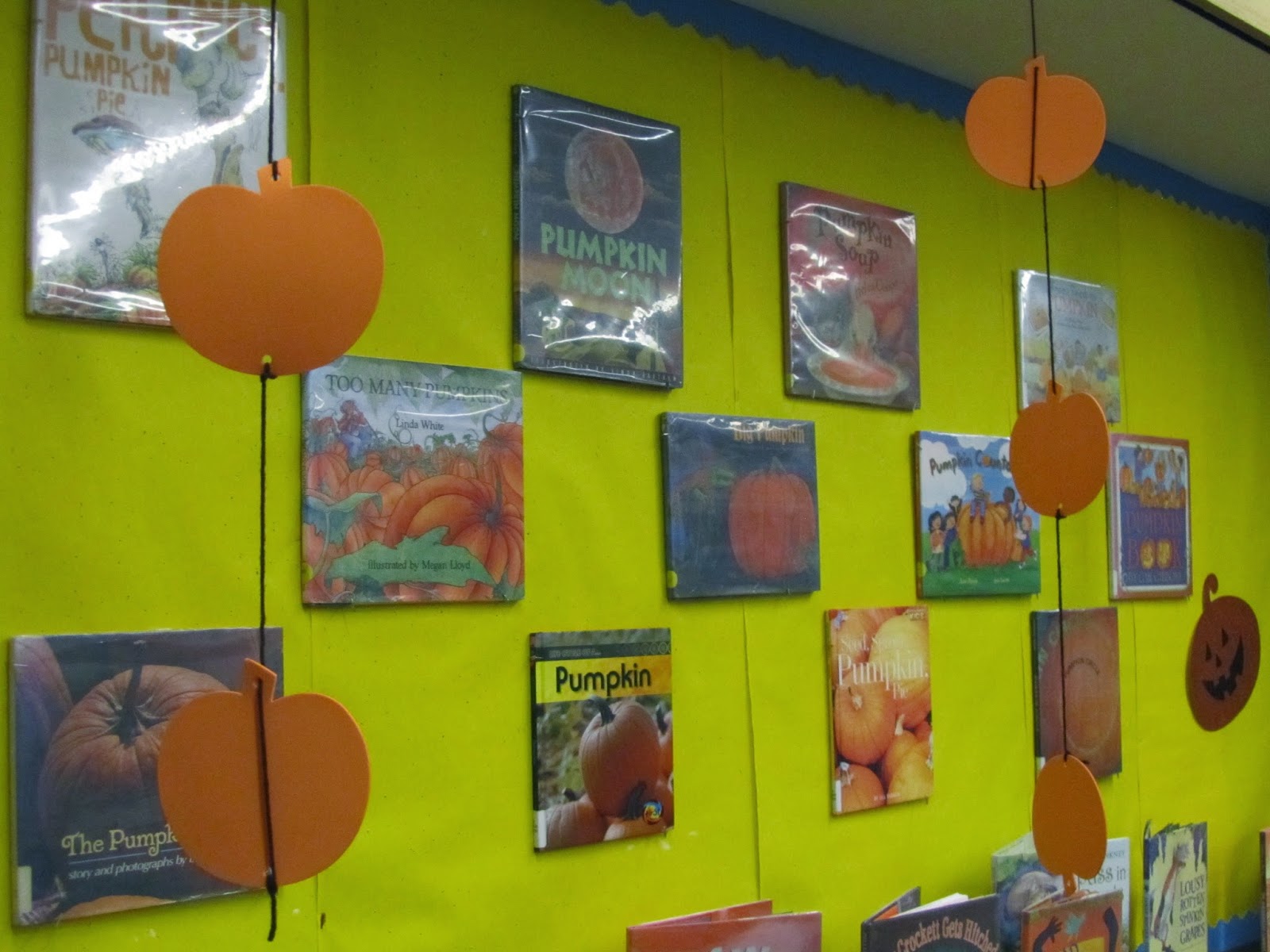 Posted by Marci Johnstone at 10:41 AM No comments: