Walking and Listening to "Whatever After: Fairest of All

Whatever Ever After: Fairest of All by Sarah Mlynowski
Scholastic Audio
2014

Yes, I am a little late to this party. I've shown countless children where to find this book on the shelf over the years, yet had never read it myself. They'd come back to the library wanting the next one and the next one, dying to know when the next book was going to come out, telling their friends all about it and getting them hooked too. After listening to just the first chapter, I get the appeal, I want to keep reading too. It's a fun, lighthearted read which fairytale fans will enjoy.

Abby's family has just moved to Smithville. Sounds rather dull doesn't it? It turns out to be anything but that when Abby's younger brother Jonah wakes her up in the middle of the night to say that mirror in the basement is humming. Reluctantly she follows him, only to be swept into the mirror and taken away to another world. There they stumble upon an apple seller knocking on a young girl's door, begging her to take the apple that she has. Not understanding why the girl refuses to open the door, Jonah tries to get the woman to give him the apple instead because he is starving. They soon learn that the woman is not who she says (turns out to be the young woman's evil step-mother) and that the girl was wise not to take the apple. Furious the woman leaves and Abby and Jonah convince her to let them in. Who is that young woman you ask? Why it's Snow White and inadvertently Abby and Jonah have changed the course of her story.

I really enjoyed Emily Eiden's narration of this story. Her voice was perky, enthusiastic and bubbly which is just how I pictured Abby to be. I enjoyed the rock 'n roll type music in the beginning and the fairytale type music in the end.


I love walking early in the morning this time of year because I can catch beautiful sunrises like this one. 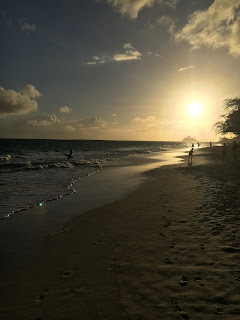 Posted by Marci Johnstone at 1:12 PM No comments:

Walking and Listening to "The Misadventures of Max Crumbly, Locker Hero"

After years of being homeschooled by his grandma, a retired kindergarten teacher who insists on Max using sippy cups, Max is headed to South Ridge Middle School. In the two short weeks that he has been there, he has defiantly had his ups (a cute girl asks him to work on the scenery of a play she's doing) and downs (he's met Thug...I mean Doug Thurston). After a rather unpleasant incident in P.E. class involving vomit, Doug sets his eyes on Max and begins to torture him whenever he can. His favorite form of torture? Locking Max in his locker, at the end of school before a 3-day weekend! After being trapped in there for hours, Max is finally able to break free and winds up in the boiler room. He realizes his only way out is through the vents in the ceiling. Crawling through the vents to freedom, he stumbles upon a robbery taking place in the school's brand new computer room and he is spotted. Uh-oh!

I can see this book being wildly popular with the boys at school, and that is what I would stick with, the actual physical book. Since I was listening to the story, I missed out on all the pictures that went along with this story.  I think if I had seen them while reading the story, I would have enjoyed the story a bit more than I did.


I love seeing all the canoes lined up so early in the morning. 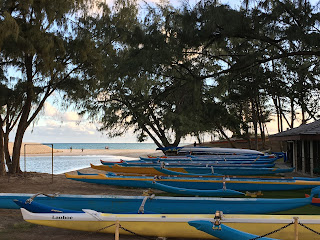 Posted by Marci Johnstone at 5:28 PM No comments:

Walking and Listening to "Counting Thyme"

The last few months haven't been easy for Thyme and her family. Her younger brother Val has been battling a rare form of cancer and while he is in remission, the best hope for him is a drug trail in New York City. For Thyme this means moving away from her best friend Shawnee, her grandmother and all that she loves in San Diego for three months.  Life in a new place should be exciting, but for Thyme it's full of ups and downs. She needs to learn how to navigate both long distance and new friendships, her brother's illness, an unfriendly neighbor, homesickness, and parents who aren't being upfront and honest with her. While Thyme knows that this move is only temporary, she secretly hopes to return to San Diego sooner than planned by collecting time by helping out around the house. This all changes though as Thyme's discovers something her parents have been hiding from her.

Counting Thyme was one of those books that made me look forward to going out walking everyday. I truly cared about these characters and wanted to know what had gone on in Thyme and Val's lives since I had last gone walking. I needed to know more about Mr. Lipinsky and if he was ever going to turn that frown upside down. I wanted my own Mrs. Ravelli, not only for her amazing cooking, but for her calm, quiet wisdom.
Kathleen McInerney did an amazing job capturing all the joy, pain, anxiousness and genuine emotion that the characters were feeling. I really can find no fault in this book other than it ended.

Favorite Chapter Title: You're a Poo


I took this picture of a lifeguard stand while out walking one morning. 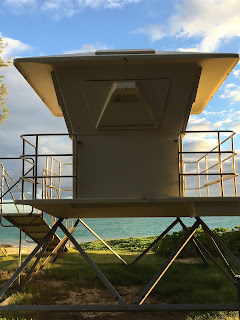 Posted by Marci Johnstone at 4:19 PM No comments:

Happy October! The Halloween decorations are all throughout the library, covering every surface imaginable. Our bulletin boards are no different.

"Get Wrapped Up In Reading" features books on mummies and graveyards. 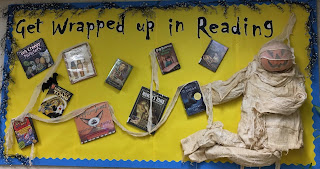 "It's Spelling Time" is all about witches. 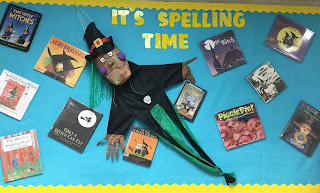 Greg has gotten bitten by the Halloween spirit and is wearing his costume already! 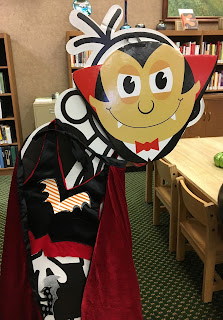 Posted by Marci Johnstone at 7:59 PM No comments:

The Cool Fish and Na Pua Melia Celebrate Shy's Birthday with Deborah Freedman (via Skype that is)! 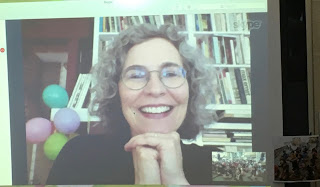 The Cool Fish and Na Pua Melia and I had been waiting for this day for what seemed like forever! We had been counting down until we got to Skype with our friend Deborah Freedman and celebrate her amazing new book Shy.

We were thrilled to see that she was ready to celebrate with balloons in the background and party hats on her stuffed animals. She showed us a birthday cake she had made for the occasion, banana cake with peanut butter frosting. It sounded delicious! The children and I sang "Happy Book Birthday to Shy" as our time together started. 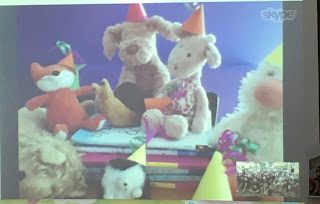 Ms. Freedman talked to us about the parts of a book, focusing on the gutter. This was super important because it turns out that is where Shy was hiding. We were hoping Shy would come out from the gutter as she read the book but we had no idea if that would happen. We could not wait for her to start reading!

The details in the illustrations were simply stunning. We saw Shy's footprints as they cautiously came out of the gutter in hopes of finding the little yellow bird that had flown over them. We were so anxious to find out who Shy was! Was Shy an ostrich like we had guessed? Was Shy an elephant? An aardvark? 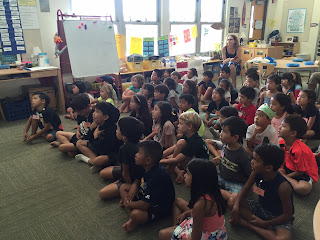 Since we were the last Skype of the day, we had an opportunity to ask Ms. Freedman some questions. Na Pua Melia had just read her book Scribble.  Before I had read the book I told them to look for the ketchup scene as I had heard there was one in the book. We searched high and low for it but couldn't find it. We had to ask for some help!
We also learned why she made the characters in Shy all animals and not humans. We learned too as to where she had gotten the idea of Shy from and how long it took her to write and illustrate it.

Before our time with Ms. Freedman was up, we encouraged her to eat a slice of the yummy cake she had made before her husband came home for work. We thought she deserved to celebrate such a wonderful book. The children and I said goodbye and had a popsicle celebration in honor of Shy. 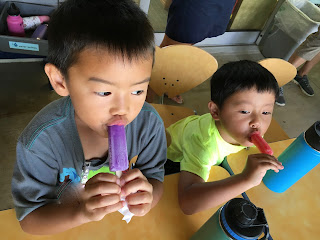 Thank you Ms. Freedman for allowing us to celebrate Shy's birthday with you. It was a day we will never forget!
*Everyone, you need to rush out and buy this book! The uses for it in your classroom and library are endless.

Posted by Marci Johnstone at 4:19 PM No comments: