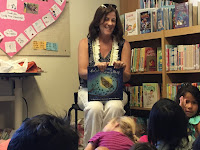 How lucky are we to have an author visit during summer school? Author Karlin Gray popped in and shared her new book, An Extraordinary Ordinary Moth with us. The timing was perfect because just the week before we had talked about how authors get their ideas and she started off by telling us that the idea for this book came from something her son had said. He had told her that his favorite bug was a moth to which she didn't have a very positive comment. Feeling badly about that, she did some research and learned that moths are extraordinary! Here she is reading a bit of her book to us.

She shared that she doesn't have an idea book or an idea jar but rather an idea Pinterest board. When she gets an idea she writes it down as fast as she can and then she'll see what there is on the internet on that topic and pin websites that she likes so that she can go back to them later. She found some really neat facts about moths when she was researching for An Extraordinary Ordinary Moth and shares ten of them in the back of the book. 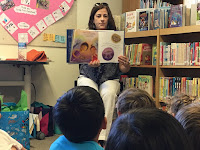 You're not going to believe this but when she was looking over the proofs of An Extraordinary Ordinary Moth there was a moth on her ceiling! She thought it was good luck and let it stay there while she was going over the proofs.  When she was done, she ushered it outside. We also found out that the publisher thought the original title was boring, it was going to be called The Ordinary Moth. They suggested adding the word "Extraordinary" and that one word helped make it the perfect title. What's next for Karlin Gray? Next summer she has a book coming out called, Serena the Littlest Sister about Serena Williams. We are looking forward to it being published.

Posted by Marci Johnstone at 2:07 PM