Nā Hōkū Meet Adam Lehrhaupt (Via Skype That Is!) 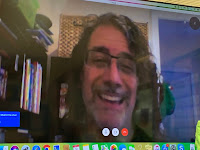 Once our monkey traps and rocket ships were done, we started to get super excited for our Skype session with Adam Lehrhaupt. We had a ton of questions, eight to be exact and Adam was more than happy to answer them all for us.
Here is just a fraction of what we learned.
He's been writing books since he was in second grade! While he says his first book wasn't very good, he felt good while he was writing it, wanted to share it with others and that made him want to write more. He is a comma making machine and loves to put commas all over his work as well as put capital letters where they don't belong. He has to take those all out when he edits his stories. It was super cool to see how he makes note of the words he wants emphasized in his books and learn how he works with the art director to make it be what he wants it to be. 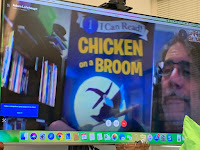 He sometimes names characters after people he knows! He has named characters after his grandparents (Henry and Clara) and he used the name his mom used to call him as a child (Sam) in the Zoey books. He isn't afraid to change characters either. In fact he just sent in chapter book that had been about 2 boys and at the last minute he changed one of the characters to a girl. He hides Easter eggs in his books, with little mentions, nods or ties to his other books. If you look carefully at the illustrations you'll see some of them.
We know what Zoey's next adventure will be! While Zoey's adventures are technically over, he has more ideas. After hearing what those ideas are, we begged him to write it!
Adam's monkey trap would be much simpler than ours. He says he would just put a string on a banana and pull it when the monkey came along. While you can't really catch a monkey that way, he would grab it and put it in his pocket or some sort of monkey bag. 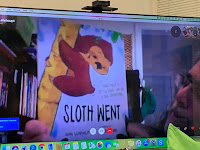 He has written nonfiction! In June his new book Sloth Went will be coming out and it is a narrative non fiction book. It is the true story of a sloths journey to go to the bathroom. He had to do a lot of research for this book because people tend to get mad when you makeup facts and call it nonfiction.  He loves to write fiction because he can makeup whatever he wants to.
Sloth Went: As Adam gave us the ultimate sneak peek of his upcoming book, one child slapped their hand against their head, shook their head and said, "This is not going to work." Another shouted, "I get it! I get it!" The rest of us, we just laughed and laughed. In the author notes in the back we learned some amazing facts about sloths, which lead us to all jumping up and doing a sloth potty dance. This book is a must have and should not be missed!
Thank you so much Adam for spending time with us. We learned so much from you and had an absolute blast doing so.

Posted by Marci Johnstone at 6:55 PM No comments:

Monkey Traps and Rocket Ships...Oh My!

It started off as an author study. It started of as literature circles. It ended up as a design challenge. Nā Hōkū and I were super excited to explore and focus on three of Adam Lehrhaupt's books, Warning: Do Not Open This Book, Chicken in Space and Idea Jar. In small groups we discovered similarities between his books, had conversations about characters, started to have some questions for him and most importantly laughed a lot. The teachers and I noticed how the kids got super excited thinking about how they'd trap the monkeys and Zoey's idea of going into space. So we decided to turn it into a design challenge.
Working in groups of 2, the kids had to first decide if they were going to build a monkey trap or a rocket ship for Zoey. 10 groups chose monkey traps and 2 wanted to make rocket ships. 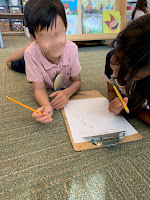 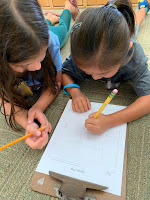 Working together they had to come up with one design and list all the supplies that they were going to be using. 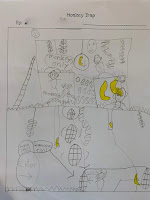 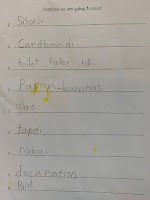 Then the building began. They cut using cardboard scissors and zip snips. 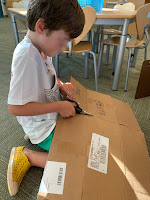 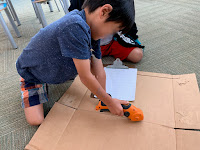 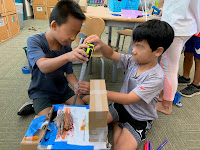 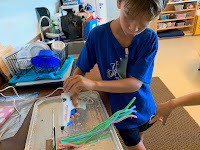 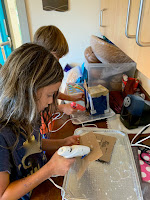 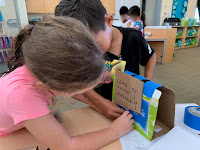 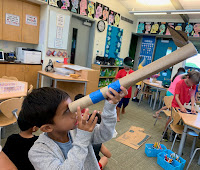 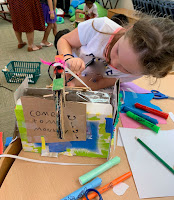 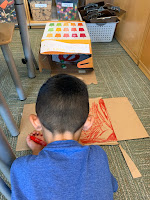 Some added signs to lure the monkeys in. 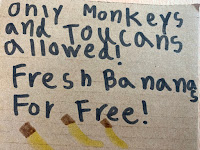 They tested their designs and reworked them if the trap didn't work exactly how they wanted it to. They also explained to us why they were doing what they were doing, "Some monkeys like the light, some don't. Some like a little light. Some are afraid of the dark." 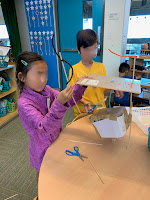 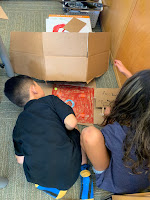 They were so incredibly focused doing this, made comments like, "I'm getting creative now and they were all having so much fun.
Here is just a few of their final designs. 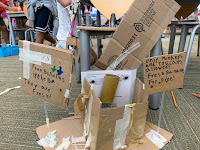 The kids are so proud of how their designs turned out. 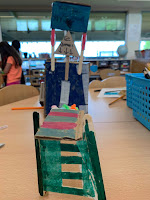 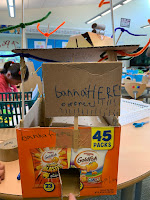 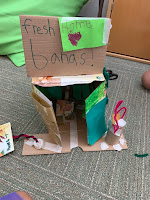 I loved seeing the students creativity, collaboration and problem solving throughout this activity and would definitely do it again.


Posted by Marci Johnstone at 10:30 AM No comments:

Let the Dot Day 2019 celebrations continue with the first graders. After reading The Dot we created our own dots using the Drawing Pad app on their iPads. 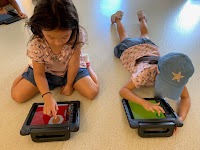 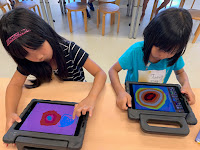 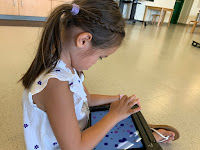 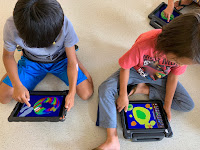 They really created whatever their hearts desired. 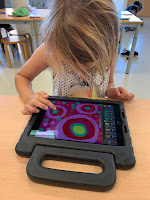 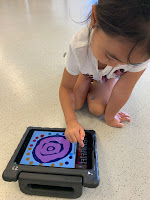 After completing the dots, we talked about things that we love to do and how we would like to encourage others to try those things. 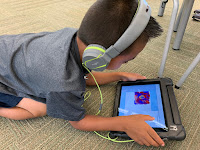 They then put their dots into Book Creator and recorded what they wanted someone to try over their dot pictures.
Here are just a few of their finished products.
The students all AirDropped their videos to me, which I then turned into one big book for each class using the Book Creator App. They turned out amazing!


Posted by Marci Johnstone at 11:41 AM No comments: